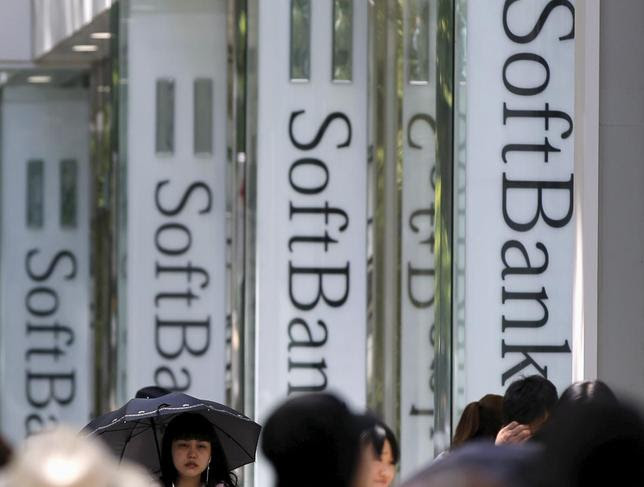 Pedestrians walk past logos of SoftBank Corp in front of its branch in Tokyo May 11, 2015.
REUTERS/TORU HANAI
Japanese telecoms group SoftBank Corp (9984.T) is investing $1 billion in South Korean online retailer Coupang as part of a plan to step up its overseas expansion and as it struggles to turn around U.S. carrier Sprint (S.N) which it bought in 2013.
SoftBank has been turning to overseas deals for growth amid a lackluster Japanese economy and shrinking demographics. The latest move comes two days after SoftBank said it had increased its controlling stake in Supercell, the Finnish mobile games maker best known for its hit title 'Clash of Clans'.
The funding, which is expected to close in July, brings the total sum Coupang has raised over the past year to $1.5 billion, the companies said in a joint statement on Wednesday. They did not disclose the size of SoftBank's stake in Coupang following the deal.
Coupang, founded in 2010 by Harvard dropout Bom Kim, offers daily deals on goods ranging from beauty products to tickets for travel and is South Korea's top online commerce firm by revenue.
E-commerce has grown rapidly in South Korea, where consumers routinely buy goods ranging from toilet paper to designer handbags through their computers or smartphones.
But intense competition and high promotion costs have raised questions about the industry's profitability. Coupang reported an operating loss of 122 billion won ($110.52 million) last year.
SoftBank's investment comes after Groupon Inc's (GRPN.O) announcement in April that it would sell a 46 percent stake in Ticket Monster, its South Korean e-commerce business, for $360 million to a partnership formed by KKR (KKR.N) and Anchor Equity Partners.
($1 = 1,103.8600 won)
(Additional reporting by Vincent Lee in SEOUL; Reporting by Ritsuko Ando; Editing by Muralikumar Anantharaman)
Bank Coupang E-commerce Investing Japan Korea Softbank