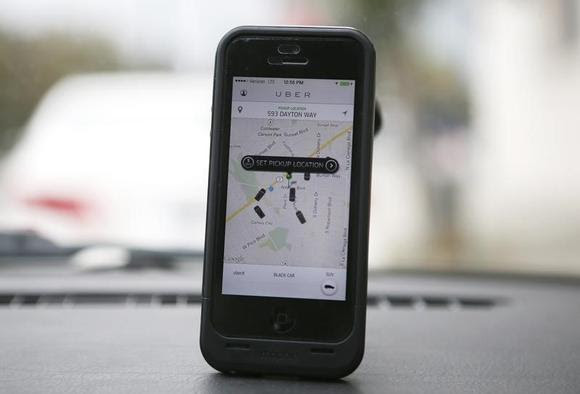 An Uber app is seen on an iPhone in Beverly Hills, California, December 19, 2013.
CREDIT: REUTERS/LUCY NICHOLSON
(Reuters) - Indian police on Sunday arrested an Uber cab driver suspected of raping a female passenger and said they would take legal action against the U.S. online taxi service for failing to run background checks on him.
The suspect was held in his home town in Uttar Pradesh where his car was earlier found abandoned. He will be brought before a New Delhi court on Monday, said Madhur Verma, deputy commissioner with the Delhi police.
Police opened a rape investigation after the 26-year-old woman reported that she had been sexually assaulted and beaten after hailing a ride home with the Uber driver from a social event late Friday in south Delhi.
Verma said the police would take legal action against Uber for violations including a failure to check whether the driver, named as Shiv Kumar Yadav, had a clean police record and the lack of a satellite location device in his car.
"Every violation by Uber will be evaluated and we will go for legal recourse," said Verma, saying police would take legal advice before opting to press a criminal or civil case.
Uber has faced critical news coverage over its driver screening in the United States, and has apologized for comments by an executive who suggested "digging up dirt" on journalists investigating the firm.
That has not stopped the San Francisco-based firm from raising investment that values it at $40 billion, reflecting the perceived potential of its expansion into high-growth markets like India.
The 32-year-old driver dropped the woman home after attacking her and warned her not to inform the authorities. She managed to note down the driver's number and take a photograph of his car, police said.
Delhi recorded the highest number of rapes in India in 2013, according to the latest National Crime Records Bureau data, earning the dubious distinction of being India's "rape capital".
Police attribute the rise in reports to more women coming forward due to greater public awareness following the high profile gang rape and murder of a 23-year-old woman on a bus in December 2012.
Uber said in a statement on Sunday that it had suspended the driver following the allegations, in line with company policy, and have provided the authorities with "all relevant details," such as driver, vehicle and trip information.
"Safety is Uber's highest priority and in India, we work with licensed driver-partners to provide a safe transportation option," Uber spokeswoman Evelyn Tay said on the company's blog.