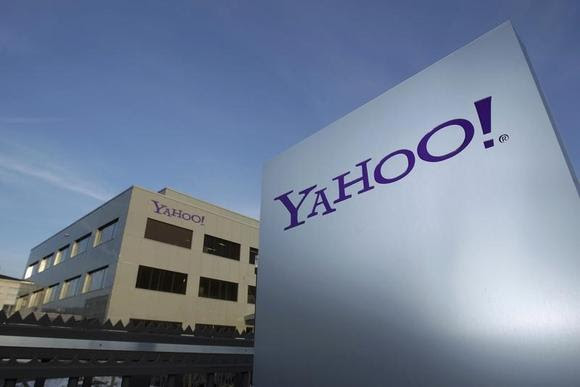 A Yahoo logo is pictured in front of a building in Rolle, 30 km (19 miles) east of Geneva, in this file picture taken December 12, 2012.
CREDIT: REUTERS/DENIS BALIBOUSE/FILES

(Reuters) - Yahoo Inc said it will join Google Inc to create a secure email system by next year that could make it nearly impossible for hackers or government officials to read users' messages, The Wall Street Journal reported.
The move comes as large technology companies unite to beef up their defenses against government intrusion and hacking, most notably after Edward Snowden exposed last year the National Security Agency's mass surveillance programs.
Google, Microsoft and Facebook Inc moved to encrypt internal traffic after revelations by Snowden that the spy agency hacked into their connections overseas. The companies have also smaller adjustments that together make sweeping collection more difficult.
Yahoo has altered its email process so users adopting encryption type messages in a separate window, preventing even Yahoo from reading the messages as they are typed, the Journal said.
Yahoo officials could not be reached immediately for comment.
Earlier Thursday, Google said it was encouraging website developers to make their sites secure for visitors by using site encryption as one of the factors to determine search ranking.