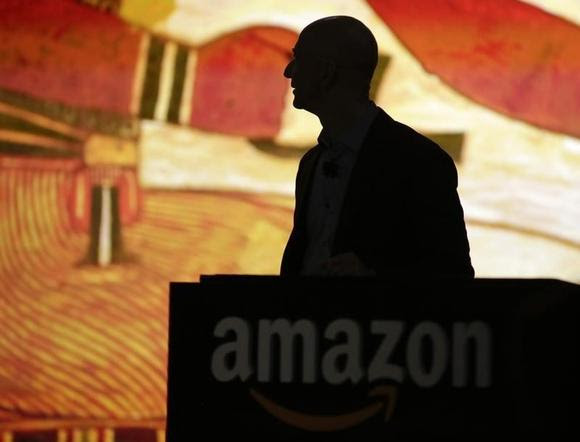 Amazon CEO Jeff Bezos is silhouetted during a presentation of his company's new Fire smartphone at a news conference in Seattle, Washington June 18, 2014.
CREDIT: REUTERS/JASON REDMOND

(Reuters) - Amazon.com Inc (AMZN.O) unveiled a $10 credit-card reader and mobile app for brick-and-mortar businesses onWednesday, marking the latest step by the U.S. online retailer to expand its presence in the physical world.
The move pits Amazon against a slew of rivals, including startup Square, which popularized a payments dongle that allowed small- and mid-sized businesses like food trucks, coffee shops and personal trainers to quickly accept credit and debit cards.
The new point-of-sale system, called Amazon Local Register, would give Amazon crucial data on how U.S. consumers shop offline. More than 90 percent of U.S. retail sales still take place in physical stores, according to U.S. government data.
Amazon hopes to court small businesses in part by charging lower fees than Square and eBay Inc's (EBAY.O) PayPal unit. Those who sign up for Amazon's program before Oct. 31 will be charged 1.75 percent for each card swiped until January 2016.
For those who sign up after October, Amazon will take a 2.5 percent cut of each card swipe, still less than Square's 2.75 percent flat transaction rate and PayPal's 2.7 percent.