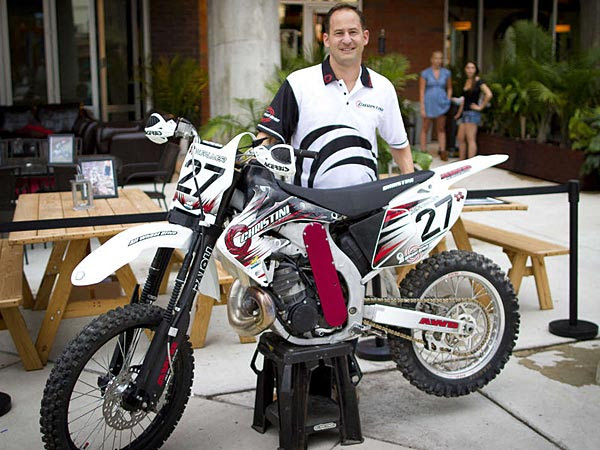 Steve Christini's Philadelphia-based is among the businesses that have signed on to be part of American Certified's new online directory of products made in the United States. (Christini Technologies Inc.)

Know what a Christini AWD 300 motorcycle, a frosty mug of Yuengling, and a part-ax, part-hammer, part-pry bar contraption named Trucker's Friend have in common?
They're made in the United States.
And for that reason, they've earned exposure in a Philadelphia start-up's online store promoting American products.
Americancertified.com launched in May with a staff of 10 in a shared workspace on North Eighth Street, claiming to be the largest retail outlet of its kind.
MORE COVERAGE
Offerings total nearly 1.5 million products, and are expected to exceed six million in about a month.
Behind this exercise in patriotic commerce is a Havertown inventor and serial entrepreneur who did not sugarcoat the experience so far.
"It certainly is one of the most difficult things I've undertaken," said Marvin Weinberger, who also runs Innovation Factory, which creates ergonomically correct hand tools, including Trucker's Friend.
His other ventures have included Infonautics Inc., an information-technology company created in 1992, the last piece of which was sold in 2001 to a Canadian company, and Electric SchoolHouse, which started in 1999 as an education-oriented, child-friendly Internet service provider and ran out of money in 2000.
Weinberger, 59, is at it again, so far personally investing about $500,000, thanks partly to the robust sales of Trucker's Friend.
He is motivated by more than hopes of eventual profits: "Our success will mean there will be more American jobs."
Weinberger said he was inspired to start American Certified by a February 2013 Consumer Reports article indicating strong consumer desire for American products, but considerable unawareness about where to find them.
"That suggested there was an opportunity to try to consolidate American products in one location and make it easy and cost-effective to do so," he said.
With "no capital or desire" to amass inventory and build warehouses, Weinberger determined the best approach was an online store using the largest accumulation of consumer products in the U.S. as a source: Amazon.
The nearly 18 months since then have been spent solving many technology problems associated with filtering out American-made products from Amazon's enormous and ever-changing inventory, which the online retailer estimates at "hundreds of millions" of items.
That required coming up with 1,000 "searchonyms" or ways to say "Made in America" - such as "built in Brooklyn" or "grown in Michigan" - to identify by computer search all Amazon products that qualify for inclusion on Americancertified.com, Weinberger said.
Further subsets were culled to serve consumers wishing to buy American products of a certain kind (gluten-free, energy-efficient) or from a type of business (women- or veteran-owned).
American Certified collects an 8.5 percent commission on every Amazon product it sells, Weinberger said. Though sales so far amount to just $5,000, he says he expects them to reach $25,000 a month by fall.
Now that the online store is established, American Certified will concentrate on building a directory of certified U.S. "makers," including traditional manufacturers as well as artisans and craftsmen.
Service businesses - those without shippable products - do not qualify.
At least a portion of a company's product must be made in the U.S. to meet American Certified standards, Weinberger said. Certification is largely on the honor system, he acknowledged: An affidavit each company must sign warns that businesses will be subject to actionable consumer complaints of fraud if their U.S.-made claims are deemed untrue.
"The American Certified site is doing a great service to consumers who are interested in making conscious buying decisions by educating the consumers about the product and company origins," said Nate Gogno, a marketing administrator for D.G. Yuengling & Son.
The Pottsville-based company, celebrating its 185th anniversary, employs 305 at two breweries in Pennsylvania and one in Florida. Plant coordinator Jennifer Yuengling appeared in American Certified's launch video.
So did Steve Christini, president of Christini Technologies Inc., manufacturer of all-wheel-drive motorcycles with headquarters a block from American Certified and an assembly facility in Cherry Hill.
Though some parts come from abroad (suspensions from Italy, engines from Spain), "at least we're doing all our assembly and QC [quality control] here," Christini said.
His company's endorsement of American Certified: "a no-brainer."