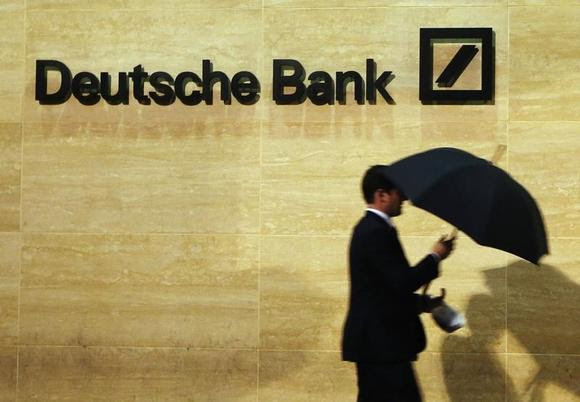 (Reuters) - The Federal Reserve Bank of New York has found serious problems in Deutsche Bank AG's U.S. operations, including shoddy financial reporting, weak technology and inadequate auditing and oversight, people close to the matter told Reuters.
In a letter to the German lender's executives last December, a senior official with the New York Fed described financial reports produced by some of the bank's U.S. divisions as "low quality, inaccurate and unreliable", said one of the sources, who is familiar with the letter.
The New York Fed, as the U.S. central bank's eyes and ears on Wall Street, directly supervises the biggest U.S. and foreign banks, partly through embedded regulators who go to work each day inside the firms.
"The size and breadth of errors strongly suggest that the firm's entire U.S. regulatory reporting structure requires wide-ranging remedial action," said the letter, first reported by the Wall Street Journal. (on.wsj.com/1r3VIn3)
The New York Fed declined to comment, citing the confidentiality of supervisory activities. The European Central Bank and German financial watchdog Bafin declined to comment.
Deutsche said it was investing 1 billion euros ($1.4 billion) to upgrade its internal systems, including the quality of its reporting, with about 1,300 people working on the improvements. "We have been working diligently to further strengthen our systems and controls," a spokeswoman said.
The letter is nonetheless a blow to Deutsche Bank co-Chief Executives Juergen Fitschen and Anshu Jain, who have been seeking to transform the lender's corporate culture amid scandals, investigations and fines following the financial crisis of 2008-2009.
While the New York State Department of Financial Services is looking at Deutsche in relation to issues including possible forex manipulation and Iran sanctions violations, the New York Fed's concerns are separate and arose from routine examinations by its staff, a source familiar with the matter said.
Other sources familiar with the matter said technical issues were at the heart of the reporting problems, meaning Deutsche will likely have to add or amend any documentation it puts out, such as statements on its performance, but not face large fines.
"These type of issues have gone from just plain looking at the balance sheet to qualitative management issues, and the Fed seems to be very unhappy with these guys," said a source familiar with the matter.
BEST IN CLASS
Deutsche Bank shares lost 0.5 percent, one of the biggest decliners in Germany's blue-chip index and the European banking sector.
"This does not fit with Deutsche Bank's ambitions to be best in class," said a Deutsche Bank shareholder, who declined to be named because he did not want to put at risk his relationship with the bank.
Germany's largest bank has been in U.S. regulators' crosshairs for some time over a host of issues, including investigations emanating from the financial crisis and criticism that it is too thinly cushioned against potential losses.
A U.S. Senate committee this week accused Deutsche, along with rival Barclays, of helping hedge fund clients to avoid taxes. Deutsche is also under investigation by U.S. authorities over alleged sanctions violations.
With the threat of fines and settlement costs looming, as well as European banking stress tests year, Germany's largest lender raised 8.5 billion euros last month to strengthen its balance sheet.
Deutsche's capital strength had been under the spotlight since Thomas Hoenig, vice-chairman of the Federal Deposit Insurance Corp, a U.S. banking regulator, described the bank as "horribly undercapitalized" in an interview with Reuters last year.
The bank, like other foreign lenders, will come under closer scrutiny by the Federal Reserve from 2016 and will be required to retain deeper capital cushions to absorb potential losses, while holding easy-to-sell assets to raise cash quickly in a potential crisis.
Foreign lenders will also be included in the Fed's stress tests of banks' resilience to economic shocks.
The Dec. 11 letter from the New York Fed to Deutsche Bank said the bank had made no progress in fixing previously identified problems and ordered senior bank executives to ensure steps were taken to fix the problems. It also said the bank might have to restate some financial data it has submitted to regulators.
A month before the letter was sent to Deutsche, New York Fed President William Dudley talked of "the apparent lack of respect for law, regulation and the public trust" in general at large lenders. "There is evidence of deep-seated cultural and ethical failures" at many of them, he said in a Nov. 7 speech on too-big-to-fail banks.
U.S. regulators ramped up the number of staff embedded at Wall Street banks in the wake of the financial crisis, with the biggest firms housing more than 100 examiners from the Fed and the Office of the Comptroller of the Currency.
The New York Fed would not say how many embeds are currently at Deutsche Bank.
"You'd like to think that the New York Fed is on top of its game and sends letters like this all the time to the big boys, but I'm not so sure," said Walker Todd, a former New York Fed legal officer now at the Institute for New Economic Thinking.
"The field examiners find these sorts of violations all the time. But comparatively few make it this high up the food chain."
($1 = 0.7428 Euros)
(Reporting by Kathrin Jones, Arno Schuetze, Aruna Viswanatha, Emily Flitter, Jonathan Spicer and Avik Das; Editing by David Goodman, David Holmes and Dan Grebler)