Rare goblin shark wasn't the only thing that surfaced

Rare goblin shark wasn't the only thing that surfaced 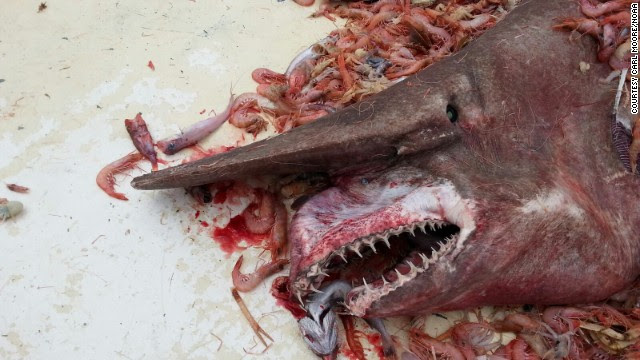 A shrimp fisherman caught a rare goblin shark off Key West.
STORY HIGHLIGHTS
(CNN) -- Photos of the gruesome-looking goblin shark a fisherman accidentally caught last month drew attention as scientists caught a rare glimpse of the deep sea creature.
But wait, there's more.
Now another marine species shown in the photographs has scientists talking.
Many deep sea isopods showed up in the pictures of what fisherman Carl Moore caught in his net, said Andrew Thaler, a marine biologist in California.
You've probably never seen one. "Imagine a pill bug the size of a house cat," Thaler said.

Click to expand: Deep sea isopods, which look like giant pill bugs, can also be seen in the photos.
The creatures, which can grow up to 20 centimeters, are common in the deep sea, Thaler said, but spotting them is rare because they're usually very spread out.
"I've never seen that many in one place at the same time before," he said.
So why would there be so many gathered together?
Maybe it was dinner time.
"Food in the deep sea is very rare. That is one of the defining characteristics of the deep sea. There is no sunlight, so there are no plants for the most part," Thaler said.
So, when something large like a whale dies at sea, he said, scavengers swarm around it.
"They can go and gorge on a carcass and survive for months," he said. "They have to be able to store all this food in their body because they don't know when they will feed again."
That means the reason Moore caught the rare goblin shark could be because it and other deep sea creatures were feasting on something, Thaler said.
In the past, scientists have studied the ocean graveyards where whales die to better understand deep sea life.
The goblin shark Moore caught last month was only the second member of the species ever caught in the Gulf of Mexico, and the first since 2000, shark expert John Carlson said.
Moore, 63, of Townsend, Georgia, estimates the shark was 18 to 20 feet long. He caught it on April 19, about halfway through an 18-day fishing trip.
The shark was still alive, so Moore released it after snapping photos.
Team finds new hammerhead shark species
Second oarfish washes ashore in California
Saber-toothed whale lands in California
Could whales explode in Canadian towns?
CNN's Mark Morgenstein contributed to this report.
deep sea isopods Goblin Shark Jonathan Kine