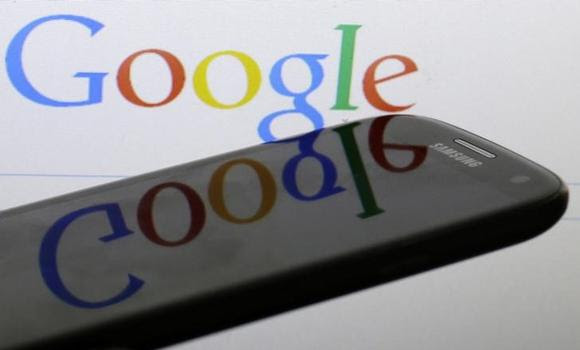 A Google logo is reflected on the screen of a Samsung Galaxy S4 smartphone in this photo illustration taken in Prague January 31, 2014.
CREDIT: REUTERS/DAVID W CERNY

(Reuters) - Google Inc is expected to unveil at least one small set-top box that resembles products like the Roku, Amazon's Fire TV, and Apple Inc's Apple TV, the Wall Street Journal reported citing sources who have seen the device.
Google will show off the set-top box on Wednesday during its developer conference, the Journal said. (on.wsj.com/1lOjtiz)
The set-top box will be powered by Google's new Android TV software designed to play movies, games and other content on television. However, the device will carry another company's brand name, the newspaper said.
Representatives from Google were not immediately available for comment outside regular U.S. business hours.
Tech companies from Microsoft Corp to Apple are vying for space on the TV - the traditional family entertainment center and where people used to spend most of their leisure time before the advent of the smartphone and tablet.
Amazon unveiled a $99 video streaming device "Fire TV" video and game streaming device in April, with hopes of boosting its main online retail business over the longer term.
In December 2012, Google sold its set-top TV box maker Motorola Home to Arris Group Inc for $2.35 billion. (reut.rs/1phAQwh)