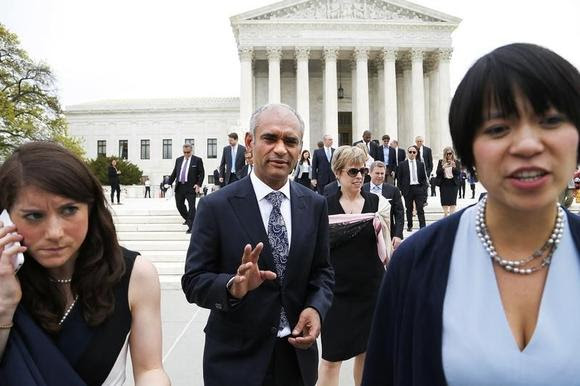 There is wiggle room in Aereo decision-Shapiro

Breakingviews: Off the Aereo

(Reuters) - Broadcast and cable TV are not dead yet.
In a decision that could crimp consumers' hopes to cut the cord from their cable operators, the U.S Supreme Court said Aereo Inc, a video streaming service backed by media mogul Barry Diller, violated copyright law by using tiny antennas to broadcast TV content online to paying subscribers.
Wednesday's 6-3 decision, written by Justice Stephen Breyer, is a victory for traditional broadcasters such as CBS Corp, Comcast Corp's NBC, Walt Disney Co's ABC, and Twenty-First Century Fox Inc's Fox.
It may also make it harder for Internet rivals to provide alternative, a la carte programming at cut-rate prices, and casts Aereo's own future into doubt.
"As convenient and as fun as it is for the consumer, an adverse decision would have completely changed the business model of Hollywood and of movies and TV," said Roger Entner, a telecommunications analyst at Recon Analytics LLC in Boston.
The decision may also raise concern for other technologies, such as cloud computing, that innovation would be stifled by making it too easy to deem use of certain content as theft. The Supreme Court majority played down that issue, saying it would wait for a case that specifically addressed such technologies.
AS SEEN WITH CABLE TV
Started in 2012 and backed by Diller's IAC/InterActiveCorp, Aereo typically costs about $8 to $12 a month, and lets users stream live broadcasts on mobile devices. Aereo does not pay the broadcasters. The service has operated in 11 U.S. cities, and does not provide subscriber data.
Writing for the majority, Breyer said Aereo is "not simply an equipment provider," but rather bears an "overwhelming likeness" to cable TV companies whose ability to retransmit broadcasts was limited under a 1976 copyright law.
Any differences, he said, "concern not the nature of the service that Aereo provides so much as the technological manner in which it provides the service," which he said constituted a public performance of copyrighted content.
Breyer agreed with the federal government that it was premature to suggest the decision could doom cloud-based services where TV shows, music and other content are stored on the Internet via servers from Google Inc, Microsoft Corp, DropBox Inc and Box Inc, among others.
Joining the majority were Chief Justice John Roberts, and Justices Anthony Kennedy, Ruth Bader Ginsburg, Sonia Sotomayor and Elena Kagan.
Justice Antonin Scalia, joined by fellow conservative Justices Clarence Thomas and Samuel Alito, dissented, likening Aereo to a "copy shop that provides its patrons with a library card" and lets them decide what to view.
Scalia said he shared the majority's "evident feeling" that Aereo's activities "ought not to be allowed."
But he said the majority distorted copyright law, and should have let Congress fashion a solution better than "the crude 'looks-like-cable-TV' solution the Court invents."
For the networks, the victory protects the estimated $3 billion in so-called retransmission fees that broadcasters get from cable and satellite TV systems. Some broadcasters had threatened to cut off their free signals or create their own low-cost Internet feeds had Aereo won.
The decision also helps professional sports leagues such as Major League Baseball and the National Football League, which have lucrative licensing contracts with broadcasters and said an Aereo victory could force them to move all games to cable TV.
AEREO LAMENTS "MASSIVE SETBACK"
Chet Kanojia, Aereo's chief executive, called the decision "a massive setback" for American consumers, but stopped short of saying it means the end of the service.
"Free-to-air broadcast television should not be available only to those who can afford to pay for the cable or satellite bundle," he said in a statement. "We are disappointed in the outcome, but our work is not done."
Diller, 72, has tried to redefine TV and how people watch it since launching the Fox network in 1986. Four years later, he even scheduled "The Simpsons" cartoon to run against "The Cosby Show," long a ratings powerhouse at NBC.
IAC, which he now chairs, holds assets such as the comedy site CollegeHumor and the video sharing site Vimeo.
In an emailed statement, Diller said about the Aereo decision: "It's not a big (financial) loss for us, but I do believe blocking this technology is a big loss for consumers." Diller is worth about $2.5 billion, Forbes magazine said.
Broadcasters' share prices rose after the decision was announced, and CBS shares closed ___ percent higher.
"This is a terrific victory for anybody who's involved in the content business," and encourages the production of more programming, CBS Chief Executive Leslie Moonves said on CNBC. "This is a very pro-consumer thing, and frankly for Aereo to say that it isn't, you know, is a little bit of sour grapes."
The decision overturned an April 2013 ruling by the federal appeals court in New York, which had denied the broadcasters' request to shut down Aereo while litigation moves forward.
The case is American Broadcasting Cos et al, v Aereo Inc, U.S. Supreme Court, No. 13-461.
(Reporting by Lawrence Hurley in Washington and Jonathan Stempel in New York; Additional reporting by Liana Baker, Jeffrey Dastin, Marina Lopes, Christian Plumb,Jennifer Saba and Alina Selyukh; Editing by Howard Goller, Will Dunham and Grant McCool)