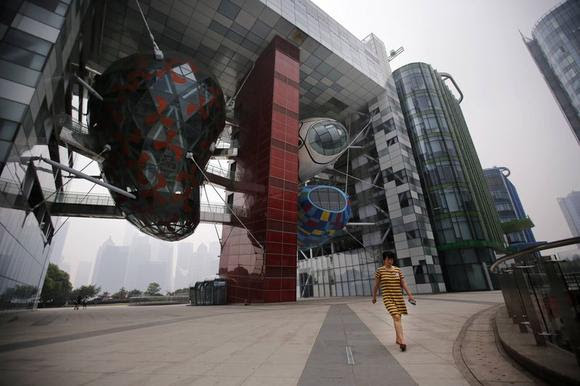 A woman walks along Block 11 area at Huangphu River in Shanghai May 25, 2014.
CREDIT: REUTERS/CARLOS BARRIA

The Vivid Sydney festival combines light sculptures, music and creative ideas. Slideshow
» Click here for more slideshows
(Reuters) - The Chinese developer behind an eight-storey clubhouse with a billion-dollar view over Shanghai's Huangphu River is turning to lower-end coffee shops and restaurants to fill the space, as a broad anti-graft campaign puts the brakes on conspicuous spending.
The state-of-the-art, steel and glass building was originally designed as a playground for China's elite, including space to mix and mingle with officials from state-owned enterprises based in offices nearby.
"Last year, we originally planned to open a clubhouse in the building, but it became too sensitive," said Vincent Zuo, a manager of research and development at Franshion Properties, which has a market value of $2.7 billion.
"We are now looking to open restaurants and coffee shops," said Zuo, adding that an art museum was another option for the arch-shaped building which sits in the middle of the company's 30 billion yuan ($4.8 billion) cruise terminal complex.
The decision to target middle-market consumers comes amid a crackdown on official corruption and extravagance in China that is forcing some high-end developers and hotel operators to change tactics to adapt to the new environment.
Franshion, a unit of state-owned Sinochem Corp which also operates the five-star Grand Hyatt Shanghai, has shifted its hotel focus more towards private events from government and business dinners. The number of wedding banquets is up 50 percent from last year, said Andy Ding, vice president of Franshion's unit China Jin Mao Group.
At the same time, consumption per head among business clients has dropped by about 30 to 40 percent since the crackdown began in 2012. Where once the average spending was around 1,000 yuan per person, now it is 600 to 700, Grand Hyatt Shanghai's manager Grace Tsou said.
CORRUPTION HANGOVER
As customers cut back, hotels are reviewing their menus. That means expensive and extravagant dishes such as abalone and lobster are out and cheaper offerings such as tiger prawns are in, said Tsou.
Also, many of these business guests now opt to bring their own liquor to restaurants - for which they are charged a service fee - rather than splurge on expensive hotel drinks.
"Our revenue has felt the impact since 2012, so we have started making changes early, such as adjusting the menu to more healthy food and less extravagant prices," said Jin Mao's Ding, whose company owns the building that houses the Grand Hyatt.
"Normal government activity demand is still there... but the money spent is not as much as in the past."
The crackdown on corruption has already sapped profits at some liquor companies. Remy Cointreau blamed the campaign for a 32 percent fall in sales of its high-end brand, Remy Martin, in the first quarter of this year.
And last month, Kweichow Moutai Co Ltd, China's top seller of fiery and pricey liquor baijiu, posted its weakest quarterly profit growth in three quarters as retail prices have dropped some 60 percent since the end of 2012.
Shanghai Xintiandi, a commercial and residential complex owned by Hong Kong's Shui On Land which houses some of the financial capital's top restaurants, bars, shops and boutiques, has also adjusted its tenant mix.
"Our restaurants are now more targeted at white-collar workers" instead of elite big-spenders, said a manager in the complex, who declined to be named as he was not authorized to speak to the media.
LUXURY HOMES HIT
Developers and owners of luxury residential property are also feeling the heat.
"The Beijing market is particularly slow. There's a lot of supply because people are dumping their high-end property into the market because of anti-corruption," said a manager of a property company who declined to be named due to the sensitive nature of the issue.
Industry watchers said owners of property priced around 40,000 to 50,000 yuan ($6,400-$8,000) per square meter had already come under scrutiny.
In another cautious note, Soho China chairman Pan Shiyi said he expects the introduction of a property registration system in June to weigh on market supply.
The database is not only seen as vital for authorities to control a frothy housing market - it would also require local officials to report properties purchased, which could raise questions about how they funded the purchases, industry experts say.
In Beijing's secondary home market, the number of units on sale in April doubled from January to 14,622 units, while average selling prices eased 2.4 percent during the period, according to data from property brokerage Midland Holdings.
Beijing-based real estate agent Pang Jianwei said he recently sold a 178 square metre apartment in central Haidian district for 12.2 million yuan, a 10 percent discount from the asking price. He expects high-end home prices will continue to see pressure.
In Shanghai, a manager at a developer said sales of villas had been hurt as some investors were opting to go overseas.
"It's hard for an ordinary person to have many assets; one has to have power to generate money, and it's difficult for him to be totally clean. These people have to protect themselves and their family so they'd rather invest overseas," said the manager, who declined to be identified.
($1 = 6.2384 Chinese Yuan)