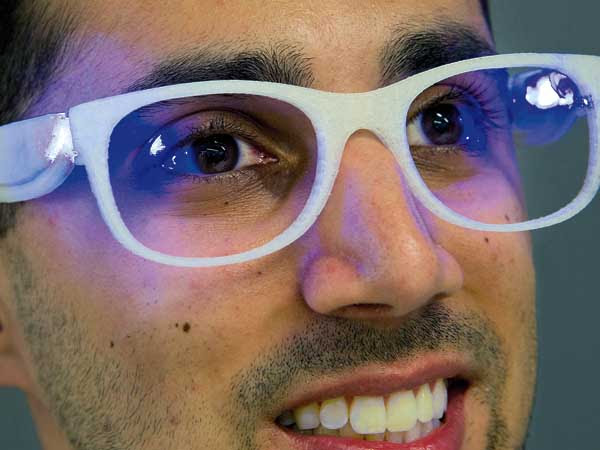 An asthma inhaler that beeps when you can't find it or alerts you if you accidentally leave it behind. Eyeglasses that can treat seasonal affective disorder and other reactions to a lack of sunshine.
Both are creations of 22-year-olds at Drexel University, members of its first graduating class in product design. And both have drawn outside attention and at least tentative commercial interest.
What does it take to become a inventor? You can see clues over the weekend at Drexel's Leonard Pearlstein Gallery, where Osman Cueto's "Breathe" inhaler and Troy Hudson's "Lumiware" glasses will be among a dozen senior projects on display.
You can also ask the inventors, as I did this week, and talk to Mike Glaser, director of Drexel's four-year-old, multidisciplinary program - part of a new breed supplanting traditional industrial design in an era when fewer products evoke vast factories and smokestacks.
MORE COVERAGE


Breathe and Lumiware are both - big surprise here - integrated with smartphone apps. But like many of the best inventions, they're designed to address real people's problems, sometimes from an inventor's own experience.
Asthma inhalers have been part of Cueto's life since he was 5. The Lansdale native has been hospitalized just twice - including after that first attack, "when I told my mom I couldn't breathe." Lately, he's needed his inhaler only about once a week. But he never forgets what every asthmatic knows: that he needs it nearby or risks bad consequences.
Thus, the Breathe: an inhaler-plus-app that helps you find it when it's mislaid, reminds you to return to the dorm where you forgot it, and alerts you when you're low on its lifesaving medicine.
At Drexel, Cueto learned the tools of product design circa 2014 - including not just old-fashioned foam mockups to get the form right, but 3D printers to create a nearly finished product.
He designed with his invention's users in mind - including those who worry about stigma if the shape of an inhaler shows through a skinny jeans pocket. In a Breathe, the mouthpiece is recessed, and its sleek body fits into a pocket like a miniature piece of industrial art.
It counts as sustainable, too. Only its medicine canister must be replaced, not an entire plastic inhaler. (See a video about it at http://bit.ly/1mFBEXb.)
Lumiware glasses also started with personal observation, if a more recent one. Hudson, from Runnemede, was bicycling to work during a Drexel co-op. He noticed that on sunny days, he just felt better.
That led him to look into light's effects on mood and behavior. He learned about seasonal affective disorder, a type of depression that hits people in low-sunlight seasons, and about lesser effects, such as sleeping too much and overeating carbs.
Interviewing sufferers, he learned that the standard therapy for sunlight deprivation, a light box, had drawbacks.
"You need to sit it next to you for 20 to 30 minutes a day," he says. "The problem is you move back and forth - you don't know how much light you're actually getting."
Lumiware solves the problem with a tiny LED, whose blue light - ideal for influencing circadian rhythms - is reflected nearly unnoticeably onto the wearer's retina. "This is much more controlled," he says, "and it adapts to changing lifestyles."
Glaser says the product-design curriculum, including psychology, engineering, and business, stresses the role of researching the challenges people face, and of designing solutions.
"An entrepreneur might say, 'There's a hole in this market and I see an opportunity.' Designers go and talk to people about their needs. They're very empathetic," Glaser says.
Cueto can't say whether early talks with a pharmaceutical company will come to fruition. The same goes for Hudson, though he's also pursuing another invention with three other Drexel students who have formed a start-up. But it seems clear that the program has given both a start.
"My whole life I've wanted to become an inventor," Cueto says. You can see for yourself this weekend. But something tells me that he and Hudson, and their 10 classmates, already deserve the title.