Written by: Gary Krakow 04/10/14 - 10:57 AM EDT  (UPDATED BY ENDAH)
Tickers in this article: S T TMUS VZ
Updated from 9:55 a.m. to include additional comments in the tenth paragraph.
NEW YORK ( TheStreet) -- T-Mobile CEO John Legere is not one to mince words or to back down from giving the competition fits. So far his threats and taunts have been successful direct hits. He promised to shake up the wireless industry with his company's "Simple Choice" service plans. He has delivered on his promise as T-Mobile is attracting new customers.
Which is why when he warned CNET that "Just when you thought it was safe to return, T-Mobile is back." He also announced the first of what he promised will be another three industry changing moves by his company. 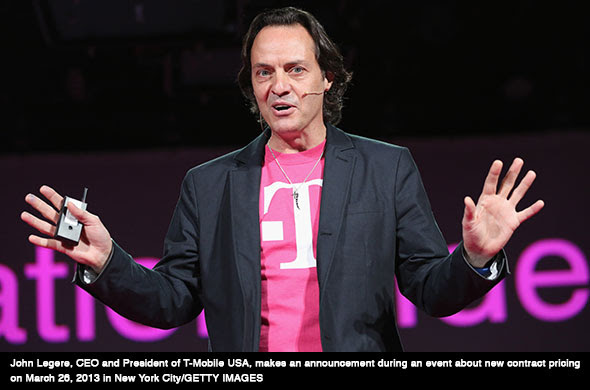 T-Mobile shares were slipping 0.16% on Thursday to $31.66 in early trading.
Despite rising revenue, T-Mobile suffered a fourth-quarter loss of $20 million in its quest to attract new customers to the service. The loss had been $8 million in the previous year.
The company's first new move, announced Wednesday, is called "Simple Starter" . It's a $40-a-month service plan designed to undercut all of T-Mobile's rivals. Beginning Saturday, April 12, customers can opt for the new plan with unlimited talk and text and up to 500 MB of 4G/LTE data. The big difference here is that unlike its other plans that 500 MB number is a hard limit.
When customers get close to that limit they'll receive a text message offering them a chance to purchase a $5 "day pass" or $10 for an extra week's worth of data. Unlike its competitors, T-Mobile's new plan gives customers a choice of whether to extend their monthly data limits instead of just imposing overage charges.
T-Mobile had doubled the LTE data limit on its slightly more expensive "Simple Choice" from 500 MB to I GB a few months ago providing for an opening to create a new plan with the lower data limit. "Simple Starter" is for individual customers, not families, but the company plans to offer it to pre-paid customers beginning next month.
As for the competition, Verizon Wireless offers "More Everything" plans, starting at $45 a month, which boast "More Network Strength, More Cloud Storage and More Unlimited International Messaging."   AT&T  offers what it calls "Mobile Share Value Plans" promising the company's "best-ever pricing. Sprint  offers what it calls it's "Framily" plan which allows you to have friends and family (as many as 10 people) share bulk-rate discounts.
Carriers are currently giving huge rebates/bounties trying to get customers to switch to their service. None of the competition has commented on T-Mobile's latest move.
This morning, CEO Legere announced "Operation Tablet Freedom" which will allow postpaid customers to add a tablet to their current accounts for free. The offer is good through the end of this year and according toT-Mobile's reckoning that comes out to an average of 1.2 GB of free 4G/LTE data each month.
Legere also promised his company would be hosting "at least" one more major event -- Uncarrier 5.0 -- sometime this year. Whatever the next move is you can be sure it will be aimed at boosting T-Mobile's customer base and bottom line as well as making life a little more miserable for other carriers. -- Written by Gary Krakow in New York .To submit a news tip, send an email to tips@thestreet.com.
Jonathan Kine T-Mobile