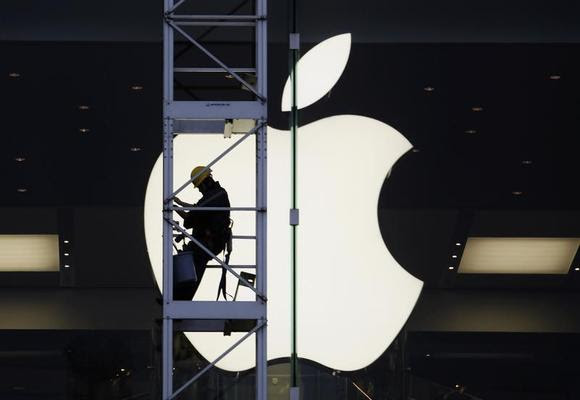 A worker climbs outside an Apple store in Hong Kong April 10, 2013.
CREDIT: REUTERS/BOBBY YIP
(Reuters) - Apple Inc on Tuesday lost an attempt to dismiss lawsuits by state attorneys general accusing it of conspiring with five major publishers to fix e-book prices.
U.S. District Judge Denise Cote's ruling paves the way for attorneys general in 33 states and territories to move forward, along with attorneys for consumers, in pursuing hundreds of millions of dollars in damages at a July 14 trial.
Following a non-jury trial, Cote in July found that Apple from 2009 to 2010 conspired with the publishers to raise e-book prices and impede competitors such as Amazon.com Inc.
The states had pursued the liability finding alongside the U.S. Justice Department without any objection by Apple and obtained a subsequent injunction against the iPad maker in September that called for the appointment of a compliance monitor.
But as the case moved into a damages phase, Apple argued that the states lacked standing to maintain an action for damages, arguing they had not alleged they had suffered any injury.
Cote, though, said it was easy to conclude the states had standing to move forward with the case.
"Apple has cited no authority to support the distinction it is advocating here between the standing to seek an end to an antitrust violation and the standing to seek damages for that violation," she wrote.
The states' case is being led by attorneys general in Texas and Connecticut. Jaclyn Falkowski, a spokeswoman for Connecticut Attorney General George Jepsen, said in an email that the office was pleased with the decision.
A spokesman for Apple did not immediately respond to a request for comment. The company has appealed the liability finding in the civil lawsuit and denies wrongdoing.
Attorneys for the plaintiffs are seeking $840 million in damages.
The publishers previously agreed to pay more than $166 million to settle related antitrust charges.
They included Lagardere SCA's Hachette Book Group Inc, News Corp's HarperCollins Publishers LLC, Penguin Group (USA) Inc, CBS Corp's Simon & Schuster Inc and Verlagsgruppe Georg von Holtzbrinck GmbH's Macmillan.
The case is In Re: Electronic Books Antitrust Litigation, U.S. District Court for the Southern District of New York, No. 11-md-02293.
(Reporting by Nate Raymond in New York; Editing by Jonathan Oatis)