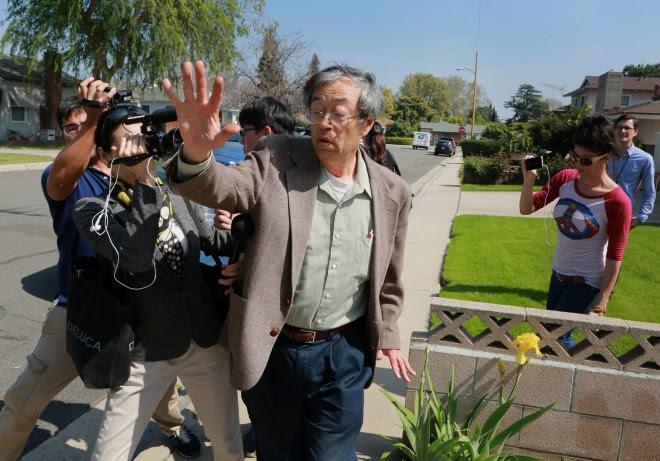 Dorian S. Nakamoto, exits his home surrounded by members of the media in Temple City, California on Thursday.Photo: Jonathan Alcorn/Bloomberg via Getty Images
In the hours after Newsweek claimed to have discovered the identity of the mystery-shrouded creator of the bitcoin cryptocurrency — pointing fingers at a 64-year-old retired engineer named Dorian Satoshi Nakamoto — a gaggle of reporters showed up on the man’s lawn in Southern California. And when he hopped into a blue Toyota Prius with one reporter, the rest of them piled into their own cars and chased him through the streets of downtown Los Angeles, desperate to get the story behind the myth of bitcoin’s founding father.
But those at the heart of the bitcoin community responded quite differently. The lead developer of the software that drives the bitcoin system was angry that Newsweek had gone after this man and his family, publishing his license plate number and a photograph of his house, and many others agreed.Even before the Associated Press reported that Dorian Nakamoto had denied any involvement with the digital currency, the bitcoin faithful were sure that Newsweek was mistaken. At the online discussion forum Reddit, one person immediately pointed out that at approximately the same time that bitcoin was released, Dorian Nakamoto was online writing letters to a model train magazine. “I don’t think it’s him,” bitcoin enthusiast Fred Friis told us soon after the Newsweek story broke, with no further explanation.
Bitcoin is — by design — a leaderless project. The digital currency runs best that way
The bitcoin community has now rejected the Newsweek articlebecause so much evidence has piled up against it. But underpinning the immediate and categorical rejection of Dorian S. Nakamoto is another phenomenon: Bitcoin is — by design — a leaderless project.
The digital currency runs best that way. Though many are curious about the real identity of the man who founded the project under the name Satoshi Nakamoto, many are also very comfortable with his anonymity. In fact, this anonymity has become an essential part of bitcoin’s evolution. If bitcoin exists to manifest the libertarian ideal that money can be exchanged far from the prying eyes of governments and corporations, then the anonymous Satoshi — too smart to ever be ID’d, too cool to even spend his estimated $400 million in bitcoins — is the real-world John Galt.
Bitcoin’s public ledger of digital transactions doesn’t exist in any one place. It exists everywhere on the network. Bitcoin works by consensus. The Bitcoin Foundation’s Gavin Andresen (who now says he regrets talking to Newsweek about the story) may be the closest thing that bitcoin has to a leader, but if the bitcoin miners don’t like the software he and his team of bitcoin hackers create, they don’t have to install it. “It’s peer to peer. It’s open source. It’s consensus-driven. And I think the idea that there’s any one person that’s a leader or a controller is antithetical to the nature of bitcoin,” says Jean-Jacques Cabou, a partner with Perkins Coie, a law firm that advises many bitcoin companies on regulatory issues.

Bitcoin, the money of choice for anarchists, has managed to become an $8 billion currency without any identifiable leader. And without its own version of Julian Assange or Linus Torvalds, criticisms about bitcoin naturally become focused on the code and on the people building businesses on top of it. That’s the point of bitcoin. With bitcoin, you don’t have to trust anyone. You can just trust the code. Theepic failure at Japanese bitcoin exchange Mt. Gox is an illustration, not a rebuttal, of that idea. Gox failed because its customers had to put their faith in the company, but the bitcoin network itself was untouched.
Two years ago, a bitcoin fan named “Myrtlewood,” put it this way when people were trying to identify Satoshi: “I hope we never find out who Satoshi is. Men are weak, ideas are bulletproof.”
As blogger Timothy Lee has pointed out, having an overly strong Bitcoin founder could create uncertainty about bitcoin’s technical future. A strong leader “would have been a liability in bitcoin’s early years,” he writes. “As bitcoin’s creator, Satoshi Nakamoto would have had a unique ability to change the rules of the game and get the bitcoin community to accept the changes.” This sort of thing could still undermine the digital currency. At the moment, the bitcoin system will eventually stop making new currency, and no central authority — no government, no Fed — can come in to make more, a move that would devalue bitcoins. But what if the leader returned? What if he called for an expansion of the currency, acting as a de facto Fed chairman?
What’s more, if Satoshi is identified, it could cause extreme personal problems for this individual — as the events of yesterday and today have shown. Reporters are still camped out on Dorian Nakamoto’s lawn this morning. A publicly identified Satoshi could be the subject of civil lawsuits or regulatory inquiries. “It’s very easy to get sued once people know who to sue. Whether there’s merit to the suit is another question,” Cabou says. And with the real Satoshi controlling an apparent $400 million in online currency, he could also be targeted by criminals here in the real world.

Deja Vu All Over Again

As yesterday wore on, the bitcoin masses only became more convinced that Newsweek was mistaken. They complained that the man Newsweek had fingered as bitcoin’s creator seemed more like a crank than a crypto-genius. The man in Los Angeles appeared to be a guy who was obsessed with model trains and free lunches, who wrote badly written reviews of double-edged razor blades and Danish butter cookies, and who, during his two-hour interview with the AP, repeatedly and mistakenly referred to the world’s most popular digital currency as “bitcom.” And, most of all, they didn’t believe that the founder of bitcoin would have used his real name in starting the project.
Curiously, that’s a premise that Newsweek itself was forced to simultaneously accept and reject in its reporting. The “trail followed by Newsweek led to a 64-year-old Japanese-American man whose name really is Satoshi Nakamoto,” Newsweek reports, glossing over the fact that Nakamoto had changed his name to Dorian Prentice Satoshi Nakamoto back in the 1970s. If Dorian Nakamoto wanted to use his real name, why not put Dorian Nakamoto on the original bitcoin paper?
Either way, this isn’t what people who know bitcoin would expect of the currency’s true founder. Bitcoin’s Satoshi Nakamoto was someone who had divulged almost no personal information about himself — who has not spent any of his bitcoin fortune because that could give researchers a way to identify him. “I would never have expected that his real name was in fact Satoshi Nakamoto,” said Sergio Lerner, a security expert who investigated some of the early online activity of bitcoin’s founder, writing via email. “This does not match with the degree of anonymity he was trying to keep.”
“This Newsweek article is no more, or less, credible than other articles supposing to find Satoshi,” says noted bitcoin developer Jeff Garzik, also via email. “It offers zero credible evidence that he designed bitcoin.”
Garzik is right. Newsweek‘s evidence is pretty weak. Tracked to his Temple City, California, home, Dorion Nakamoto never actually admitted any involvement in bitcoin to Newsweek‘s reporter, Leah McGrath Goodman (she didn’t respond to our requests for comment). Hounded by reporters, Dorian Nakamoto eventually told the Associated Press that he hadn’t heard of bitcoin until three weeks earlier, when his son was contacted by a reporter. Online, there’s a donation fund that aims to buy Dorian Nakamoto some trains to compensate him for the media horde that has descended on his front lawn for two days running.
In some ways, we’re just repeating history. Dorian Nakamoto isn’t the first person to be fingered as bitcoin’s creator. In a 2011 New Yorker piece, Joshua Davis suggested that Satoshi might be a Dublin researcher named Michael Clear. Shortly after Davis’s story was published, a journalist named Adam Peneberg analyzed Satoshi’s writing to conclude that Nakamoto was actually three people: Neal King, Vladimir Oksman, and Charles Bry. But these claims were mostly debunked.
By the end of the day yesterday, the bitcoin community had pretty much unanimously decided that Dorian S. Nakamoto was not the real Satoshi either. So the mystery remains. And Bitcoiners seem to like it that way.
Below: Watch Dorian Nakamoto deny that he invented bitcoin.

Robert McMillan is a writer with Wired Enterprise. Got a tip? Send him an email at: robert_mcmillan [at] wired.com.
Read more by Robert McMillan
Follow @bobmcmillan on Twitter
Bitcoin Bitcoin wallet Jonathan Kine Satoshi Nakamoto