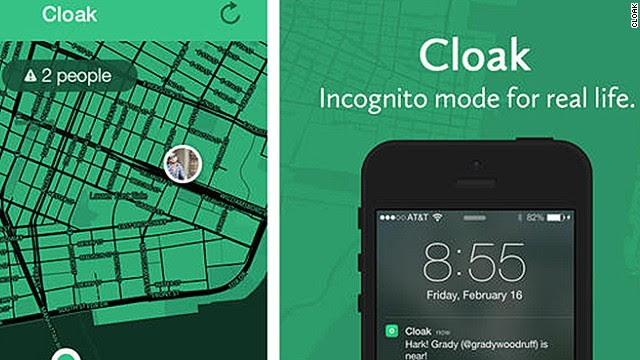 The new Cloak app helps you avoid people in the real world. Uh-oh, looks like Jared is only 600 feet away.
STORY HIGHLIGHTS
(CNN) -- After moving to New York, Brian Moore could not stop running into his ex-girlfriend. There were four awkward and unplanned encounters in six months, to be exact.
So while most social apps are about connecting with friends, family or good-looking strangers, Moore began to wonder if a mobile tool could use the same readily available location information to help you avoid certain people.
That's how he and Chris Baker were inspired to create Cloak, a freeiPhone app that pulls in location check-ins from your contacts' Instagram and Foursquare accounts. It maps out the positions of people you know based on their most recent social posts so you can give them the slip.
Cloak's tagline is "Incognito mode for real life." You might say it's an anti-social network.
Click on a bubble on the map, and you'll see a person's name, his or her location and about how long ago he or she checked in there. If it was a while ago, the image will appear faded, like a ghost.
"We feel like we've reached the point of social fatigue -- too many networks with too much information, all the time," Baker says. "It's OK to turn off and pick up a copy of 'Walden' and just be alone."
The app lets people set up push alerts for acquaintances they'd prefer to avoid such as exes, frenemies or annoying co-workers. If someone wants to drop off the grid completely, he can set up these notifications for everyone in his social networks -- presumably while sneaking through dark alleys or hiding behind sunglasses and a hat.
The app only works with Foursquare and Instagram for now, so it has limited usefulness if your friends aren't active on those networks. But the developers hope to add Facebook soon. They say Twitter's location information is still weak, but they may add that service as well someday.
Dodging friends isn't necessarily an anti-social activity. Baker says there are plenty of times a person might want to avoid being seen, such as while on a first date or during a quick run to the grocery store in pajamas. Anyone playing hooky, recovering from plastic surgery or carrying on a clandestine relationship might also find the app useful.
For some digital users, the move away from always-on oversharing is a natural progression. After years of being on our phones 24/7, getting constant updates from our social networks and broadcasting our every social outing, many of us crave a break. All that contact online can leave us wanting more privacy in real life.
"Twitter and Facebook ... are like giant auditoriums where we put on 'public performances.' And those have grown exhausting. That's why Snapchat felt so refreshing," Moore says.
The app is still young, but Moore says users have already found creative, social ways to use it. Some are exploring Instagram images by using the map, while others have set up alerts for people they do want to see.
In theory, someone could use the app purposefully to run into people who'd rather be ignored. To prevent any unwanted abuse of your location information, lock down your privacy settings and don't share your whereabouts unless you're comfortable with people knowing exactly where you are.
"Social has had its moment in the sun. Now people are beginning to revolt," Baker says.
78
cloak Data Security Jonathan Kine personal security