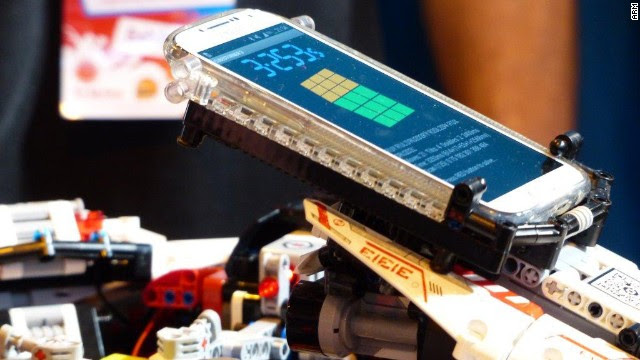 Cubestormer 3 is powered by a Samsung Galaxy S4, which analyzes the cube and tells the robot what to do.
STORY HIGHLIGHTS
(CNN) -- If you were never able to solve a Rubik's Cube without peeling off the stickers or prying it apart with a butter knife, you're really going to hate this robot.
Cubestormer 3, a robot built with Legos and powered by a smartphone, shattered its predecessor's record over the weekend, solving the iconic '80s puzzle in just over 3.5 seconds.
The lightning-quick feat, pulled off Saturday at the Big Bang Fair in Birmingham, UK, shaved nearly two seconds off the former Guinness-recognized world record of 5.27 seconds, accomplished by the same team's Cubestormer 2. That mark narrowly bested the best human time of 5.5 seconds, set by Mats Valk of the Netherlands last year.
"We knew Cubestormer 3 had the potential to beat the existing record, but with the robot performing physical operations quicker than the human eye can see, there's always an element of risk," said David Gilday, who built the robots along with co-inventor Mike Dobson.
Dobson is an engineer with ARM, the company that makes the souped-up processors in the Samsung Galaxy S4 used to power Cubestormer 3.
The phone analyzes the cube and calculates the best sequence of moves to solve it, then instructs the robot's four arms to get to work.
Eight Lego Mindstorms EV3 bricks perform motor control and sequencing on the robot.
"In the end, the hours we spent perfecting the robot and ensuring its motor and intelligence functions were properly synchronized paid off," Gilday said. "Our big challenge now is working out if it's possible to make it go even faster."
The cube, originally called the Magic Cube, was invented in 1974 by Erno Rubik, a Hungarian architect. It is believed to be the best-selling toy of all time, with more than 350 million cubes sold since it was launched internationally in 1980.
According to its makers, any permutation can be solved in 20 moves or fewer.
While they were at it, Gilday's team members also set a couple of other Rubik's Cube records over the weekend.
Another robot solved a 4-by-4 cube (the regular Rubik's is 3-by-3) in just over 1 minute, 18 seconds, and an intricate 9-by-9 cube became the biggest ever to be solved by a robot, with another machine sorting it in just over 34 minutes.
Jonathan Kine Lego Robot Rubick's cube