The Macintosh is 30, and I was there for it's birth.

The Macintosh Is 30, and I Was There for Its Birth 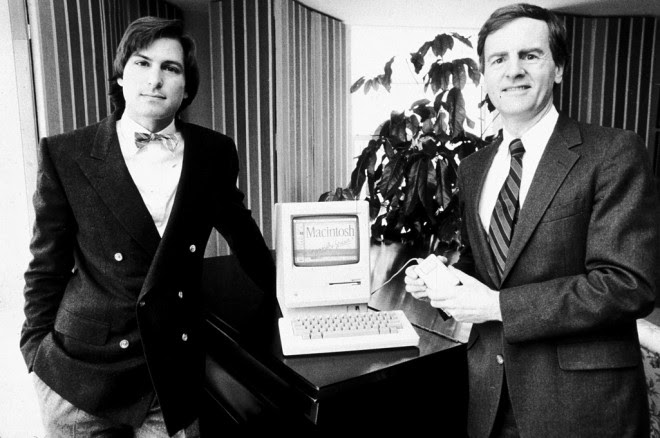 Nineteen eighty-four was not like 2014. When Steve Jobs launched the Macintosh, he had to generate excitement about a product — a computer — that was unfamiliar to most people, if not downright scary. His creation would eventually entice them into changing their minds, but first, they had to be intrigued enough to learn about it.

The Macintosh was new, but the media would have to be old. There were no tech blogs, no Facebook, no Twitter, and certainly no Mac rumor websites. There were no websites at all. So Jobs had to generate his own campaign to tell the world about the computer that he would announce on January 24, 1984, 30 years ago today.

Jobs had to generate his own campaign to tell the world about the computer that he would announce on January 24, 1984, 30 years ago today.
Part of the effort came in the production of the now-famous Ridley Scott Super Bowl commercial that climaxed with a dynamic woman athlete flinging a hammer to disrupt the ravings of an unnamed evil empire’s mouthpiece. For those in the know, the oppressive regime was supposed to represent the ruler of the digital world in those days, IBM. (See, that was a long time ago.) But the stratospheric production values and the epic sweep of those 60 seconds created a promo that was revolutionary even without subtext.
Almost no one remembers who played in the Super Bowl (the Los Angeles Raiders beat the Washington Redskins.1 Like I said, 1984 wasn’t like 2014). But the commercial, aired two days before the Mac launch, is part of history, and many can recite the tagline verbatim: “On January 24, Apple will introduce Macintosh. And you’ll see why 1984 won’t be like ’1984.’”

Jobs also planned a massive advertising campaign to follow, including a complete mini-publication that would run in multiple magazines. But, as he would do often in his subsequent career, Jobs relied on the news media to provide the narrative focus for his effort. He decided to give the exclusive story, along with early access to the team, to Newsweek and Rolling Stone, though he also gave briefings to a new magazine called Macworld.
I was the Rolling Stone writer.


No Cover for the Mac

The assignment was my idea. I had been covering the computer world for a couple of years, and while the rest of the world paid little attention, Silicon Valley was buzzing with anticipation about Apple’s mysterious new machine. I managed to overcome editorial skepticism at Rolling Stone to get an OK to cover the launch, something of a stretch for the magazine of music and youth culture. But I was stunned when Apple did not embrace my idea right away. Its reps insisted — on orders from Jobs, I later learned — that my coverage was contingent on putting the Macintosh (or, presumably, Jobs) on the cover of Rolling Stone. And that wasn’t going to happen.
Finally, Jobs relented, and in November, I found myself at Bandley Three, the modest building in which the Mac team was frantically trying to squash software bugs and lock down features before the launch. It was to be one of the greatest days of my life in reporting. 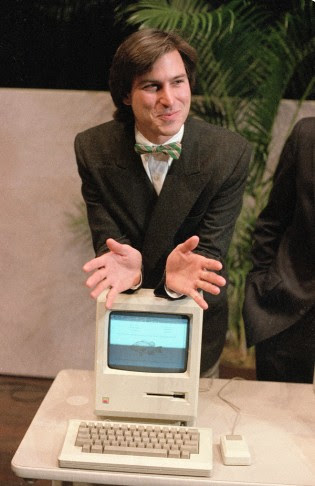 First, I met the machine. From the instant the woman running the demo switched on that strange-looking contraption (inspired in part by the Cuisinart food processor), I knew the Macintosh would change millions of lives, including my own. To understand that, you must realize how much 1984 really was not like 2014. Until that point, personal computers were locked in an esoteric realm of codes and commands. They looked unfriendly, with the letters of text growing in sickly phosphorescence. Even the simplest tasks required memorizing the proper intonations, then executing several exacting steps.
But the Macintosh was friendly. It opened with a smile. Words appeared with the clarity of text on a printed page — and for the first time, ordinary people had the power to format text as professional printers did. Selecting and moving text was made dramatically easier by the then-quaint mouse accompanying the keyboard. You could draw on it. This humble shoebox-sized machine had a simplicity that instantly empowered you.

I had barely taken that in when I was introduced to some of the team that created the machine. I was blown away by the energy of people like Andy Hertzfeld, Bill Atkinson, Joanna Hoffman, Susan Kare, Steve Capps, and others. They went out of their way to connect with me because they adored Rolling Stone. Mostly in their twenties, the Mac people viewed the computer they had created as something akin to the rock and roll that flowed in their veins. The Macintosh was built to be as transgressive and empowering as the music that played on their stereos and opened the world to them.
That’s what had excited me about computers too, so the Mac team charmed me from the get-to. To this day, some of them remain my close friends.


And Then There Was Jobs

After a series of meetings, I was to meet the impresario of the Macintosh, Steve Jobs. We were scheduled to go to dinner together. By then, I had heard a lot about him, and gotten more than a whiff of the intrigues involved in the creation of the Mac (including an earful from the exiled manager who originally conceived of the project).

I have to admit my first moments with Jobs were not auspicious. He complained again that the story would not be on the cover. Then he proceeded to use scatological terms to describe a recent Rolling Stone story about MTV. I interrupted the rant by informing him that I had written that story. Jobs simply changed the subject.

Jobs proceeded to use scatological terms to describe a recent Rolling Stone story about MTV. I interrupted the rant by informing him that I had written that story.
At dinner, though, he was loquacious, candid, and of course wildly enthusiastic about the launch. He portrayed Apple as a pirate aggregation that was civilization’s last hope against an evil dominant force — just like in the commercial. (He spoke about the 1984 ad with some wistfulness, since at that time the Apple board had decided not to run it on television. Of course, it reversed that decision).
He was also wildly dramatic about what he might do if the world didn’t understand the excellence of his creation — perhaps go to Italy and ride motorcycles, he said. He also talked about the future of Apple, sharing its dream that it would grow to be worth $10 billion. But, he said, he hoped it would be a $10 billion company that did not lose its soul.

It was the first of many conversations I would have with Jobs over next few decades, up to the year he died. But it was perhaps the most unforgettable, simply because it was all so new. The computer. The team. Steve. The whole package was, in a nutshell, the essence of the seismic shift about to occur, one that would indeed, as I heard it said that day, put a dent in the universe.

Universe, consider yourself dented. In 2014, IBM doesn’t even make PCs. Apple is not a $10 billion company, it is a half a trillion dollar company. Jobs is gone, but he left us after having had rebuilt the company beyond its previous glory, satisfied that he’d restored its soul.
Amazingly, one thing has not changed: Through three decades of evolution, we still have a machine whose DNA recognizably traces back to its origin. Indeed, 30 years after Jobs introduced his machine at the Flint Center in Cupertino, I am writing these words on a Macintosh.
So, at least in one sense, 2014 is just like 1984.
Steven Levy is the author of Insanely Great: the Story of Macintosh, the Computer That Changed Everything. To mark the book’s 20th anniversary today, it has been updated with a transcript of Levy’s original interview with Jobs in November 1983. It is available today on the Kindle version and other formats soon.
1Correction 11:09 EST 01/24/14: An earlier version of this story incorrectly said that the Washington Redskins beat the Los Angeles Raiders in the 1984 Super Bowl.