Smartphones to Open Doors at Some Hotels

Starwood to Begin Test of Virtual Keys Stored in Apps 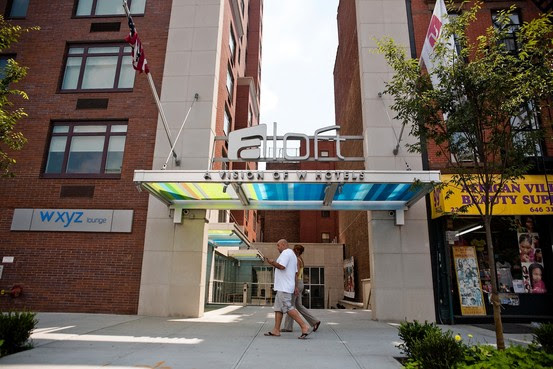 Guests at the Harlem Aloft Hotel in Manhattan, N.Y. soon will be able to enter their rooms with a smartphone. Natalie Keyssar for The Wall Street Journal
Guests arriving at the Aloft Hotel in Manhattan or one in Silicon Valley will soon be able to do something hotels have dreamed about offering for years: walk past the check-in desk and enter their rooms by using a smartphone as a room key.

The boutique hotel brand from Starwood Hotels & Resorts Worldwide Inc. HOT -3.60% plans to offer this feature at two hotels, in the Harlem neighborhood and in Cupertino, Calif., before the end of the quarter.
Guests at these properties will receive a message on a Starwood app containing a virtual key, which will unlock the door with a tap or twist of their phone through the use of Bluetooth technology. The company says the iPhone 4s or newer models and the Android phones running 4.3 or newer will be compatible.
Starwood officials are hoping this will be one of the biggest technological changes in the industry since free Wi-Fi. "We believe this will become the new standard for how people will want to enter a hotel," says Frits van Paasschen, Starwood's CEO. "It may be a novelty at first, but we think it will become table stakes for managing a hotel."

Not everyone is so sure. Past attempts to use technology to streamline the check-in process have had mixed results.

Robert Habeeb, president of the First Hospitality Group, which is the owner of 55 hotels in the U.S., says he pulled out check-in kiosks at two of his Holiday Inn hotels after finding that most guests ignored them. He found that many travelers will sacrifice speed or ease to talk with a staff member and ensure their room has the right view or location, or to try for an upgrade. Other guests may still want to be greeted when they arrive.
"The hotel front desk is a bit a like a bartender," Mr. Habeeb says. "It can be an interaction people enjoy."
Hotels have never been known for being in the forefront of technology. The industry is often a laggard, in part because many hotels are owned and managed by separate companies, making investments in technology more complicated.

Nevertheless, many hotel operators have been searching for ways to eliminate the bottlenecks that can form at a hotel's front desk. The delays are the bane of many a road warrior's travel experience.
"Everybody has to check in, but we are all doing it pretty much the same way we were 100 years ago," says Christopher Nassetta, chief executive officer for Hilton Worldwide Holdings Inc. HLT -0.93% "It's something we are seriously addressing."

Marriott International Inc. MAR -1.62% has introduced a process it calls mobile check-in at 350 of its flagship Marriott brand hotels world-wide, with another 150 getting the service by this summer. Loyalty program members can check in via their phone, then go to a separate check-in desk to pick up a key.
InterContinental Hotels Group IHG.LN -0.15% PLC is testing a similar process for its loyalty members at Crowne Plaza hotels. Hyatt Hotels Corp. H -2.76% offers kiosks at some of its hotels, while at its upscale Andaz brand, floating staff use iPads to check guests in, instead of a traditional front desk.
Starwood executives say they recognize that some guests prefer the personal touch at check-in and have no plan to remove front desks. But they are also betting that a virtual-key approach will win over guests at a time when people are increasingly reliant on mobile devices for everything from ordering food or movie tickets to watching their favorite sports team.

By the end of next year, the Stamford, Conn., company is hoping to introduce the virtual key at all its luxury W Hotels and Aloft hotels, which today represents 123 properties.
The Aloft and W are newer hotel chains that attract a younger, more tech-savvy crowd. Owners of older hotels may find the costs associated with lock upgrades could be prohibitively expensive, and that guest demand for mobile check-in could be more limited, hotel analysts say.
Mr. van Paasschen says that the response from Aloft hotel owners, who will have to pay for upgrades to door locks to run the new system, has been "very enthusiastic." He declined to specify the costs to hotel owners for the upgrades, saying that the "investment would not be substantial" and that Starwood would make a "significant contribution" to the expenses involved.

Yet it is still not clear that virtual keys will do better than previous attempts to circumvent traditional check-ins. An effort several years ago to allow guests to enter rooms with the magnetic strip on their credit cards never caught on. Guests worried about security and were reluctant to give their kids credit cards instead of room keys.

Starwood officials say they developed the precursor to the mobile-phone key in 2010, when the company created a keycard for its loyalty-club members, whose credit-card and other personal information was already on file with Starwood. The keycards have been used at select Aloft hotels in the U.S.
The card is mailed to a guest and is activated on check-in day once the room is ready. That same card could be reactivated as a room key for any of 14 participating Aloft hotels.
Mr. van Paasschen said the response was positive but Starwood wanted to go a step further, eliminating the need to mail guests a separate card. About a year ago, the company began working on a virtual room key, which the company dubbed "Project Sesame." The technology and hardware were developed with Swedish lock maker Assa Abloy ASSA-B.SK -1.40% AB.

A Starwood spokeswoman said that the locks are all battery operated, so they wouldn't be affected if the hotel's computer systems went down. The locks wouldn't work if the battery dies, but hotel staff gets an alert when the batteries are low.
Write to Craig Karmin at craig.karmin@wsj.com