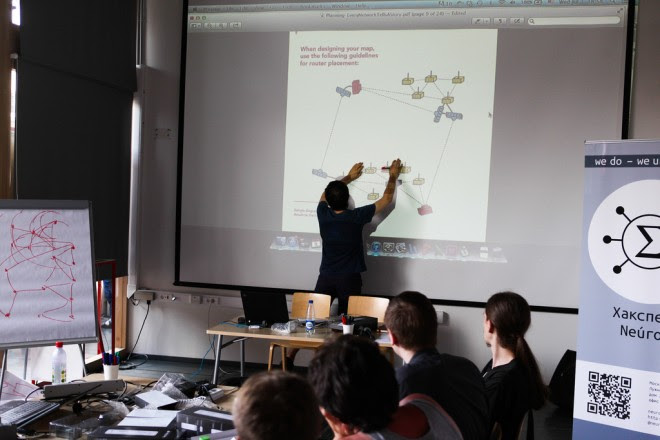 Nets of Freedom creating mesh networks. Image: Strelka Institute / Flickr
The internet is weak, yet we keep ignoring this fact. So we see the same thing over and over again, whether it’s because of natural disasters like hurricanes Sandy and Katrina, wars like Syria and Bosnia, deliberate attempts by the government to shut down the internet (most recently in Egypt and Iran), or NSA surveillance.
After Typhoon Haiyan hit the Philippines last month, several towns were cut off from humanitarian relief because delivering that aid depends on having a reliable communication network. In a country where over 90 percent of the population has access to mobile phones, the implementation of an emergency “mesh” network could have saved lives.

Compared to the “normal” internet — which is based on a few centralized access points or internet service providers (ISPs) — mesh networks have many benefits, from architectural to political. Yet they haven’t really taken off, even though they have been around for some time. I believe it’s time to reconsider their potential, and make mesh networking a reality. Not just because of its obvious benefits, but also because it provides an internet-native model for building community and governance.
But first, the basics: An ad hoc network infrastructure that can be set up by anyone, mesh networks wirelessly connect computers and devices directly to each other without passing through any central authority or centralized organization (like a phone company or an ISP). They can automatically reconfigure themselves according to the availability and proximity of bandwidth, storage, and so on; this is what makes them resistant to disaster and other interference. Dynamic connections between nodes enable packets to use multiple routes to travel through the network, which makes these networks more robust.
Compared to more centralized network architectures, the only way to shut down a mesh network is to shut down every single node in the network.

That’s the vital feature, and what makes it stronger in some ways than the regular internet.
But mesh networks aren’t just for political upheavals or natural disasters. Many have been installed as part of humanitarian programs, aimed at helping poor neighborhoods and underserved areas. For people who can’t afford to pay for an internet connection, or don’t have access to a proper communications infrastructure, mesh networks provide the basic infrastructure for connectivity.
Not only do mesh networks represent a cheap and efficient means for people to connect and communicate to a broader community, but they provide us with a choice for what kind of internet we want to have.
For these concerned about the erosion of online privacy and anonymity, mesh networking represents a way to preserve the confidentiality of online communications. Given the lack of a central regulating authority, it’s extremely difficult for anyone to assess the real identity of users connected to these networks. And because mesh networks are generally invisible to the internet, the only way to monitor mesh traffic is to be locally and directly connected to them.


But the Real, Often Forgotten, Promise of Mesh Networks Is…

Yet beyond the benefits of costs and elasticity, little attention has been given to the real power of mesh networking: the social impact it could have on the way communities form and operate.
What’s really revolutionary about mesh networking isn’t the novel use of technology. It’s the fact that it provides a means for people to self-organize into communities and share resources amongst themselves: Mesh networks are operated by the community, for the community. Especially because the internet has become essential to our everyday life. 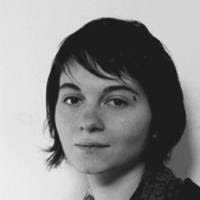 Primavera De Filippi is a researcher at CERSA / CNRS / Université Paris II. She is currently a research fellow at the Berkman Center for Internet & Society at Harvard Law School, where she is investigating the legal challenges of distributed online architectures.

Instead of relying on the network infrastructure provided by third party ISPs, mesh networks rely on the infrastructure provided by a network of peers that self-organize according to a bottom-up system of governance. Such infrastructure is not owned by any single entity. To the extent that everyone contributes with their own resources to the general operation of the network, it is the community as a whole that effectively controls the infrastructure of communication. And given that the network does not require any centralized authority to operate, there is no longer any unilateral dependency between users and their ISPs.
Mesh networking therefore provides an alternative perspective to traditional governance models based on top-down regulation and centralized control.

Indeed, with mesh networking, people are building a community-grown network infrastructure: a distributed mesh of local but interconnected networks, operated by a variety of grassroots communities. Their goal is to provide a more resilient system of communication while also promoting a more democratic access to the internet.


Are We There Yet?

In recent years, different mesh network initiatives have emerged to address the above and other objectives that could be accomplished with mesh networking.
For instance, in face of the damages caused to Haiti’s communication infrastructure by the 2010 earthquake, the Serval project was launched in Australia with the objective to create a disaster-proof wireless network that relies exclusively on the connectivity of mobile devices.
Meanwhile, after the Egyptian government attempted to shut off the internet in the whole nation, the Open Mesh Project emerge with the goal of providing open and free communications to every citizen in the world regardless of national boundaries.

Finally, there is the Open Technology Institute’s (an initiative of the New America Foundation) Commotion Wireless project. Originally aimed at providing a secure and reliable platform to prevent authoritarian regimes from controlling or blocking dissident or activist communications, it has so far only been deployed in confined areas where the communication infrastructure was either damaged or missing.
So why hasn’t mesh networking already taken off?
Well, there are technical reasons of course. The complexity to set up, manage, and maintain a mesh network is one obstacle to their widespread deployment. Getting a mesh network to work properly can be harder than it seems, especially when it comes to latency. Although the technology is there, routing protocols are currently unable to scale over a few hundred nodes and network coverage is constrained by the limited range of wireless user devices.

Another barrier is perception (and marketing). Mesh networks are generally seen as an emergency tool rather than a regular means for communication. While many mesh networks have been deployed during a period of crisis (during the Boston marathon bombing for example) or after standard communication infrastructures have been damaged or destroyed (such as the Redhook initiative in Brooklyn), very few have been deployed beforehand. They’re used more as an ad hoc measure than a precautionary one that could provide an alternative and more resilient network infrastructure.
Finally, there are political and power struggles, of course. Even though mesh networking could theoretically support the government in providing internet connectivity to poor neighborhoods or undeserved areas, mesh networks cannot be easily monitored, nor properly regulated by third parties. As such, mesh networks are sometimes regarded by the state as a potential danger — one that could disrupt public order by providing a platform for criminal activities.

The same is true of the private sector. For large ICT companies (including mobile operators and ISPs) mesh networking constitutes a new competitor in the market for internet communication, which — if it were more widely deployed — could potentially jeopardize their traditional business model based on pay-per-use and monthly subscriptions. Whether nefariously or simply because of structural circumstances, these actors are all committed to maintaining the status quo of the current internet ecosystem.
* * *
The problem is that we are focusing too much on the technical and legal challenges of mesh networking as opposed to the social benefits it might bring in terms of user autonomy and community-building. Or have we not yet realized that we have finally reached a competitive point in communications where we can deploy more than one internet? Instead of trying to create one perfect network that will satisfy us all, we can, instead, choose between several networks to find the one that best suits us.
As has been done with Freifunk in Germany and GuiFi.net in Spain, more mesh networks need to be deployed on an arbitrary basis. This will help establish the basic infrastructure necessary to ensure the autonomy and long-term sustainability of a community-based network structure. One that, in any kind of situation, can connect people and even save lives.
But beyond the internet, the governance model of many community wireless networks could potentially translate into other parts of our life. By promoting a DIY approach to network communications, mesh networking represents an opportunity to realize that it can sometimes be more beneficial for us, as a community, to rely on our own resources and those of our peers than that of centralized authorities. It’s bringing the principles of the internet to our physical lives.
Data Center Jonathan Kine Mesh networks