In China, the Coolpad Is Hotter Than Apple's iPhone

In China, the Coolpad Is Hotter Than Apple's iPhone 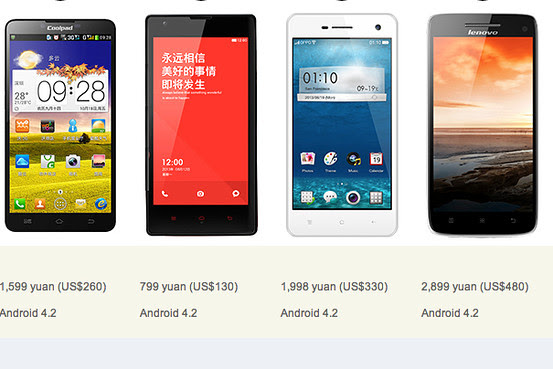 HONG KONG— Apple Inc. AAPL -7.99% and Samsung Electronics Co. 005930.SE -0.31% are the dominant smartphone brands in the U.S. and in many other parts of the world. But in China, the world's biggest smartphone market, there isn't a clear winner yet.
Virtually unheard of outside China, several homegrown brands are gaining ground and seeking to challenge the technology giants' duopoly. Working in their favor: advanced hardware at lower prices, strong relationship with Chinese carriers, as well as creative ways to build a fan base through social media and online forums.
Hundreds of millions of Chinese mobile users still haven't replaced their basic phones, making the country a critical battleground for global smartphone brands at a time when growth is slowing in the U.S. and other mature markets.

Zhou Cheng, a 25-year-old shop manager in the southern province of Hunan, recently purchased his first smartphone to replace his old Nokia NOK1V.HE +0.59% handset. He spent nearly $500 for the Oppo Find 5 from Oppo Mobile Telecommunications Corp., based in Dongguan. The device runs on Google Inc. GOOG +1.98% 's Android operating system, and comes with a 13-megapixel camera and a 5-inch high-resolution screen that has more pixels per inch than Apple's new iPhone 5S.
"It looks good and works well," Mr. Zhou says, describing Oppo as cooler than other Chinese smartphone brands such as Lenovo Group Ltd. 0992.HK +4.20% and Huawei Technologies Co. "Oppo is for young people and its phones are more stylish." The Find 5, which is about 30% cheaper than Apple's entry-level iPhone 5C in China, also fit his budget.

Mr. Zhou is one of many Chinese consumers that companies like Oppo, Coolpad and Xiaomi Inc. are targeting. Their growing presence is creating a more challenging environment for foreign brands such as Apple and Samsung.

China's mobile market is so big that some local handset vendors, despite focusing mainly on the domestic market, already sell more smartphones overall than global competitors. In the third quarter of last year, Coolpad, the smartphone brand of China's Yulong Computer Telecommunication Scientific (Shenzhen) Co., was the sixth-biggest smartphone vendor by units sold world-wide, ahead of Nokia Corp. and Sony Corp. 6758.TO +1.38% , according to Canalys.

In China itself, Coolpad ranked third with a market share of 11%, behind Samsung's 21% and Lenovo's 13%. Apple came in fifth with 6%.
Apple will likely get a boost in China this year after China Mobile Ltd. 0941.HK +0.07% , the country's largest carrier with more than 760 million subscribers, started selling iPhones for the first time on Jan. 17. Earlier this month, China Mobile Chairman Xi Guohua said the carrier had received preorders for more than a million iPhones since it started accepting them in late December.
Apple on Monday reported a 29% increase in its revenue in China, Hong Kong and Taiwan combined for the quarter ended Dec. 28. The company didn't disclose its iPhone sales in China, but Chief Executive Tim Cook said, "We've been selling with China Mobile now for about a week. And last week was the best week for activations we've ever had in China."

Still, analysts said the higher upfront costs of China Mobile's iPhone contracts—compared with those at other Chinese carriers—could deter many price-conscious consumers. 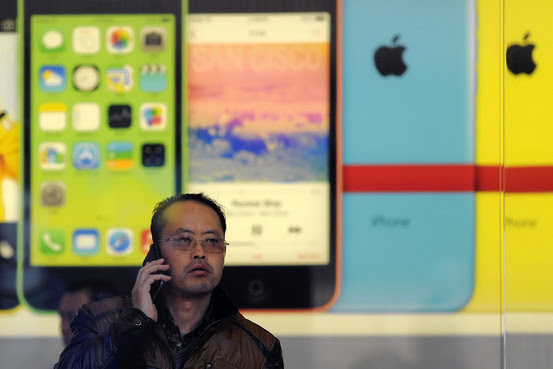 Despite competition, Apple is one of the most desirable brands in China. Agence France-Presse/Getty Images
Coolpad, which started out in 1993 as a maker of pagers and telecom equipment, is now one of the more established players in China's mobile industry. Its strength lies in its close business ties with all major Chinese telecom carriers, which help distribute its phones outside major urban centers such as Sichuan and Hunan.
One of Coolpad's most popular phones, the Coolpad 9080W, comes with a 5.7-inch screen, an 8-megapixel camera and a quad-core processor, even though it sells for about $260.
Coolpad says it is trying to attract millions of first-time smartphone users in China. Its parent company reported that its first-half profit in 2013 rose 40% to 212.8 million Hong Kong dollars (US$27.4 million) from HK$152.5 million in 2012.
"When first-time smartphone users have a good experience with our phones, they may buy more expensive Coolpad models later when their purchasing power increases," said Coolpad Vice President Zhang Guang-qiang in an interview.

Some analysts are skeptical about Coolpad's strategy, noting it will be a big challenge to raise its brand and convince consumers to pay more for its handsets.
Apple remains one of the most desirable brands in China, as local consumers' recent frenzy over the gold-colored iPhone 5S indicated. Samsung, a household name in China because of its TV sets, sells smartphones that cost less than $200 to compete against local handset vendors.
Apple and Samsung declined to comment about competition in China.
Executives from Chinese smartphone makers say their companies are well positioned to understand the local market and cater to the needs of specific types of Chinese consumers.
Enlarge Image 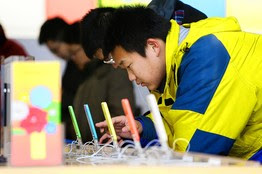 A customer tests an iPhone 5C at an Apple store in Beijing. Reuters
Oppo, which has previously used actor Leonardo DiCaprio in its ads and promoted its phones through tie-ins with local TV shows, has been particularly successful in attracting young female customers.
The private company doesn't disclose earnings, though it said it makes a profit from smartphones.
Beijing-based Xiaomi is another Chinese smartphone vendor known for its marketing savvy. The company, founded in 2010, has since created a cultlike fan base among techie types who are often early adopters of new gadgets.

Xiaomi, which doesn't disclose whether it is profitable, sells its phones mainly through its own website, and offers an array of accessories including multicolored batteries and dolls. It builds brand loyalty in part by constantly tweaking its version of the Android operating system with suggestions from users and by offering weekly updates.

"If you give us a suggestion, and we quickly change it, you will have a long-lasting sense of achievement," said Xiaomi founder Lei Jun in an interview. In the third quarter, Xiaomi was the No. 6 smartphone vendor in China, slightly behind Apple, according to Canalys.
Social media has played a role in Xiaomi's popularity. Mr. Lei, who has been often compared with Apple's late founder Steve Jobs for his presentation style at product releases, has close to eight million followers on Sina Weibo.

Looking to expand its business overseas, Xiaomi last year hired Hugo Barra, who was an executive at Google's Android business. Mr. Barra said earlier this month that Xiaomi would expand into Singapore.
The success of Xiaomi and Oppo made other Chinese companies see the importance of marketing and social media.

Coolpad's Mr. Zhang said that the company's executives have become more active on social-media platforms like Sina Weibo and on the Chinese smartphone messaging service WeChat.
"Being a software engineer, I didn't talk to users and media several years ago," said Mr. Zhang. "But the market has changed a lot. Now I always interact with users on my Weibo," said Mr. Zhang, who has more than 275,000 followers on the microblog.
Coolpad has won fans including Yang Guang, an 18-year-old student in Guangzhou who bought the Coolpad 9070 smartphone several months ago.
"Only a minority of students from wealthy families can afford to buy expensive foreign-brand smartphones," said Mr. Yang.