By Dean Obeidallah
Updated by Endah)
Think before you Tweet!! 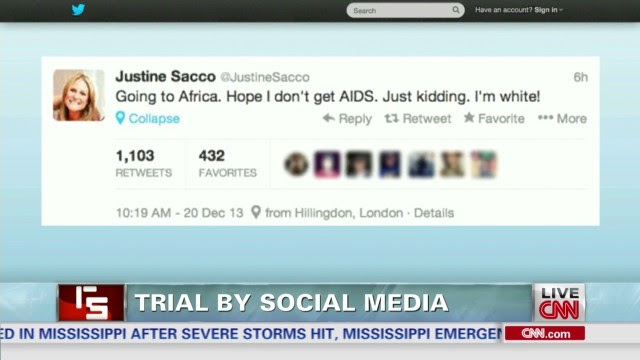 STORY HIGHLIGHTS
Editor's note: Dean Obeidallah, a former attorney, is a political comedian and frequent commentator on various TV networks, including CNN. He is the co-director of the new comedy documentary "The Muslims Are Coming!" Follow him on Twitter @deanofcomedy. This article was originally published on December 5 and updated December 22.
(CNN) -- Who could've ever predicted that 140 characters could screw up so many people's lives?

But that's exactly what has happened to politicians, executives, government staff and others because of their comments on Twitter. This social media platform has morphed from a fun place to an information hub to a career killer.

And astoundingly, even people who work in PR -- you know, the folks who are supposed to advise clients on how to avoid social media disasters -- can tweet out statements that cause a media uproar. We saw that this weekend when Justine Sacco -- who at that time was a PR executive -- tweeted shortly before her 12-hour flight to South Africa on Friday: "Going to Africa. Hope I don't get AIDS. Just kidding. I'm white!"
Those 64 characters tweeted by Sacco resulted in her now being known as "ex-PR executive." Sacco was fired by IAC, the media company headed by Barry Diller, within hours of landing in South Africa. The lesson here is clear: Just because you say "Just kidding" or "LOL" after your statement doesn't mean you won't get canned for your tweet. Sacco apologized Sunday: "For being insensitive to this crisis -- which does not discriminate by race, gender or sexual orientation, but which terrifies us all uniformly -- and to the millions of people living with the virus, I am ashamed."

Of course, not every Twitter mistake ends a career. Some just result in embarrassment or an avalanche of mocking tweets.
For example, recently the Republican National Committee tweeted: "
Today we remember Rosa Parks' bold stand and her role in ending racism." The RNC's intent was to commemorate the anniversary of Rosa Parks' refusal to move to the back of a segregated bus in 1955.
But instead, the tweet set off a firestorm with people ridiculing the RNC for suggesting that racism had ended in America. Consequently, the RNC was compelled to tweet out a clarification.

The paradox of Twitter is that it's really easy to use and it's just as easy to screw up. So in an effort to help people avoid the pitfalls that have caught so many others, here are some tips for you to keep in mind before you press "send" on that next tweet.

1. Proofread your tweets
Sounds simple enough, right? But since we all tweet in a hurry, we often send out typos. One of the worst typos was made by White House senior adviser Dan Pfeiffer, who put out a tweet that accidentally included the N-word. (He was trying to tweet the word "bigger.") Of course, he deleted that tweet and apologized. But a quick proofread would've prevented this.

2. Racist tweets = unemployment
This should be a no-brainer, but then again so should proofreading tweets.

3. Nothing on Twitter stays anonymous forever
Okay, you're not an idiot. You know enough not to badmouth your employer or co-workers on your personal Twitter account. So you create a fake Twitter account. Genius, right?! Well, just ask Jofi Joseph, a former senior National Security Council staffer who did just that. Joseph created an anonymous Twitter account and leveled criticism at co-workers and even his superiors. He was discovered and fired. Honestly, how can a guy who works with the NSC not realize that the NSC could figure out who he was?!

5. You don't have to be famous to get fired for a tweet
Having a lower-level job and only a few Twitter followers doesn't translate into immunity from being canned for a tweet. That's the lesson a young guy who worked at a food truck in New York City discovered the hard way. In his case, a big group from a local company ordered food but didn't leave a tip. A few minutes later the employee took to his personal Twitter account to mock the people who had stiffed him and mentioned their company by name. How many Twitter followers did he have? About 300. But two days later he was fired for ridiculing customers.

6. Even jokes can get you fired
I'm a comedian, and I've been subjected to numerous attacks for my jokes on Twitter -- usually from people who say they are offended that I mock their conservative icons. That comes with the territory of being a comedian. But there's a line that comedians can cross which will actually get you fired. Comedian Gilbert Gottfried found out exactly where that line was drawn after he tweeted a series of jokes seemingly mocking the victims of the Japanese tsunami in 2011. Gottfried apologized, but that wasn't enough for insurance giant Aflac. He was fired from his gig as the voice of the Aflac duck.

7. Don't confuse sending a direct message with tweeting
This is an easy mistake to make -- just ask former Rep. Anthony Weiner. Direct messages go to one person and are private like an e-mail. Weiner's problem occurred when he intended to send a photo of himself in his underwear via direct message to one woman. Turns out he accidentally sent the photo to everyone on Twitter. The rest is history.

8. If still in doubt about a tweet, try the "FireMe!" app
This app will rate your tweet to give you a sense of whether you will be fired for sending it out. While not foolproof, it can be helpful.
Hopefully, these eight suggestions will help you better navigate Twitter without losing your job.
Of course, there will always be people who get fired for using Twitter inappropriately. But the upside is that without a job, they will have more time to think before they tweet. It's just too bad that they didn't do that earlier.
Follow us on Twitter @CNNOpinion.
Join us on Facebook/CNNOpinio
Discipline Jonathan Kine Think Twitter