These Incredible Animated GIFs Are More Than 150 Years Old

These Incredible Animated GIFs Are More Than 150 Years Old


More than 150 years before Buzzfeed uploaded its first cat GIF, people were already captivated by looping animations. In those days, of course, there was no photoshop or screen grabbing, no Tumblrs and Twitter to help craft and share the perfect GIF. Rather, artists relied on optical tools—things like zoetropes, phenakistoscopes, thaumatropes and other gadgets with very strange names to bring their illustrations to life. These pre-cinema devices used all sorts of low-tech tricks to make that happen, but despite their simpleness, optical tools are often regarded as the forefathers to the modern GIF. “We’re all interested in seeing movement,” says Richard Balzer. “It was a different time, but the same challenge: How do you make things move?”

Once back in the United States, Balzer began collecting in earnest, eventually dedicating an entire carriage house to storing his hundreds of optical tools. For the past five years, Balzer has been digitizing his collection and uploading it to his virtual museum, The Richard Balzer Collection. The site is a fascinatingly deep dive into the little-known world of optical tools, full of illustrations, diagrams, photographs and flash animations.
But you get the sense that unless you were part of the small, but fervent band of optical tools lovers, you probably wouldn’t stumble across Balzer’s site. This was a problem. “I think a collection ought to be shared,” he says. “I wanted to create something very lively that people would like.”

Animated zoetrope illustration. Image: Richard Balzer/Brian Duffy
So the question became: How do you convince a generation that’s perfectly content to watch a cat in a shark suit ride a Roomba to be interested in antique animation toys? “The simple answer is, just show them as they were,” says Balzer. “Not as static figures, but as animations.” This led Balzer to hire Brian Duffy, a young Los Angeles-based animator who began helping Balzer digitize and animate Balzer’s collection of phenakistoscope and zoetrope illustrations.

For the past two years, Duffy has been uploading the bizarrely fascinating GIFs to Balzer’s Tumblr, essentially giving people who were born long after the optical tools heyday a chance to see what animation looked like more than a century ago.

Duffy began by digitizing the phenakistoscope illustrations, a device that was invented by Belgian physicist Joseph Plateau in the early 1830s. The tool is a spinning disc on a stick, usually 10 to 12 inches in diameter, with  a series of illustrations drawn around the circle with equally-spaced radial slits.
The viewer would stand in front of a mirror and spin the disc while looking through the slits, and as the drawings rotated around the axis, they passed through the slit’s shutter effect, which turned the still illustrations into a looped animation.

The phenakistoscope was originally created for Plateau’s scientific inquiries, but it was soon adopted by the general public as a form of entertainment. “He was not only a scientist but extraordinarily creative,” Balzer says of Plateau. “If you look at the designs you’ll see that they’re extraordinarily modern and interesting.”
The zoetrope, invented a year later, operated on the same general principles as the phenakistoscope, only the animations would be drawn on a 2 to 3 foot-long strip and placed inside the interior circumference of a cylindrical drum. As the drum spins around, a group of people could peer through the viewing slits and watch as the illustrations were animated. 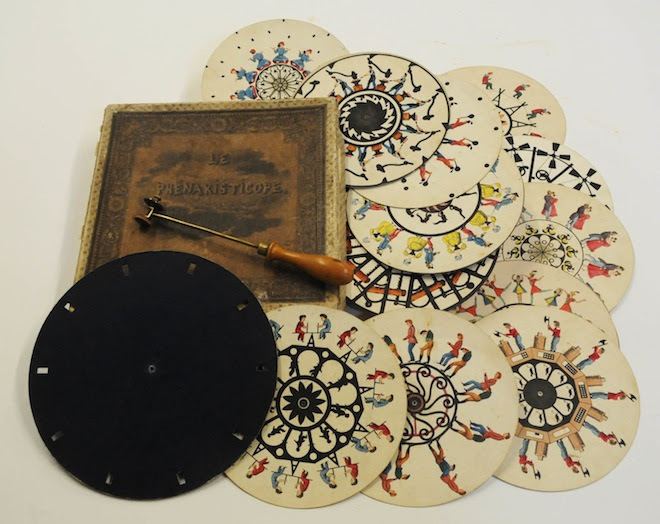 A set of phenakistoscope disks. Image: Richard Balzer
To ensure the vintage drawings looped at the correct pace once converted into GIF form, Duffy would photograph each zoetrope and phenakistoscope illustration head on, scan it into photoshop and sequence the frames using the slits as a guide for pacing. He worked with Balzer to ensure the animated frames matched the timing of an actual spinning optical tool. “We couldn’t make it too fast or too slow,” Balzer says. “It took a lot of experimenting.”

Though both optical tools are distinctly analog experiences, they translate effortlessly into GIF form—a testament to their influence on modern animation. Plus, says Duffy, digitizing the illustrations has a way of helping the illustrations become their ideal form. “The level of control you see is very much a digital thing,” he says, explaining that every time a person would spin the optical tools, they’d end up with a different speed of animation. “This isn’t a way that these animations were ever anticipated to be experienced, which was really fascinating. It’s almost like we’re finding its essence in a lot of ways.”
Art Jonathan Kine