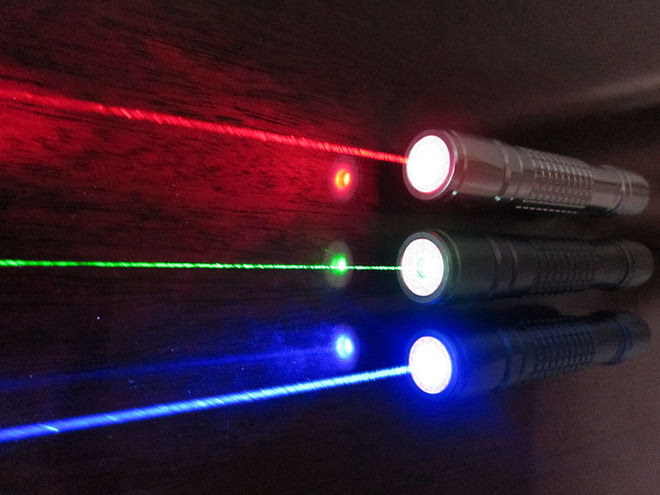 Lasers! Photo: Wikipedia/BOY
It begins with a clip from the 1953 film version of War of Worlds, where flying alien spacecraft blow things up with brightly colored beams of light. Then we hear the voice of someone who sounds suspiciously like Orson Welles. “Science fiction? Well, yes,” he says. “But today there’s a very real happening in science that reads like fiction.”

Cut to an AT&T physics lab, where you see another beam of light — “a created beam of light, so intense, so controllable, and so versatile, that it promises…Lasers Unlimited.”

That’s the tile of this 1969 AT&T promotional film, meant to show off the many facets of the real-life laser, a technology invented by Bells Labs scientists about seven years after H.G. Wells’ War of the Worlds hit the big screen. The AT&T film (see below) touches on everything from laser data storage and laser telecommunications to laser surgery and, yes, laser weaponry — all from a now-quaint late-1960s point-of-view. It even looks at tattoo removal.

Yes, as far back as 1969, we were using lasers to erase the evidence of that “impulsive visit” to the tattoo parlor.

But the good people at AT&T and Bell Labs, the company’s research arm, were more interested in other stuff. What they really wanted to do was figure out how to send laser beams over vast distances — creating faster and more reliable services for transmitting voice, pictures, and data — and fulfill the company’s diabolical plan to forever rule the world of telecommunications.

The only trouble is that others were already developing such tech in 1969. “It was interesting to see how Bell Labs considered transmitting laser signals over long distances was still an unsolved problem in 1969,” says laser historian Jeff Hecht, after viewing the film. Hecht points out that Charles Kao, who would later win the Nobel Prize for his work, had dreamt up the first fiber optic communications systems, separately from AT&T.

“The solution for that problem was in progress,” he says. “But sometimes, Bell Labs didn’t appreciate it when solutions came from somewhere other than Bell Labs.”
Nonetheless, AT&T saw the laser as a means of growing the Ma Bell monopoly, creating “millions of new communications paths will be available for unique services of the future, like the Picturephone, which may one day, when linked to a computer, do our arithmetic or give us the latest stock quotations.” The Picturephone never quite took over the world. But AT&T wasn’t completely off-base. Other phones would eventually do math, feed us the latest stock values, and, yes, handle video calls. And, as Ma Bell also predicted, lasers became a standard way of cutting chips, performing surgery, and imaging the brain.

Ten years after making this gem of a film, AT&T made a sequel. Called simply “Lasers,” this one is modeled after Stanley Kubrick’s 2001: A Space Odyssey, a movie made, um, 11 years earlier. It’s certainly worth a look too, as much for its — ahem — style as its content (also below).
In any event, AT&T was right. The laser became a very big deal. “A lot of the ways that lasers impact our lives are not in the public eye, but in the background,” says Hecht. “Lasers are all the way through the internet and our global communications systems. A lot of that is invisible to us.”