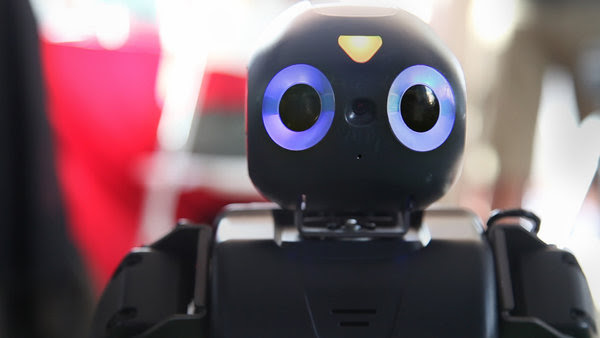 A Woodstock for Robots: At the Robotics Challenge 2013 Trials in Homestead, Fla., teams that built rescue robots competed for a chance at a $2 million prize next year.

HOMESTEAD, Fla. — An international competition to pave the way for a new generation of rescue robots was dominated by a team of Japanese roboticists who were students in the laboratory of a pioneer in the design of intelligent humanoid machines.

The Johnson Space Center’s Valkyrie robot competes at completing a task, closing a valve, at the Darpa Robotics Challenge.
Enlarge This Image

A Boston Dynamics employee with the company's LS3 robot during a demonstration Friday.
Enlarge This Image 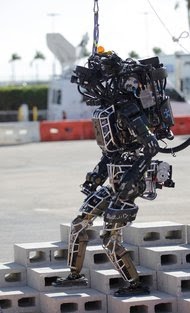 Boston Dynamics' Atlas, a high-mobility, humanoid robot designed to negotiate rough terrain, takes on an irregular surface in a terrain negotiation exercise.
The early roboticist, Hirochika Inoue, began working in the field almost a half-century ago at the University of Tokyo, and in the mid-1990s led the design of robots that could both walk and manipulate objects.
Students from the lab where Dr. Inoue did his early work, who then studied under Masayuki Inaba, a roboticist who was one of Dr. Inoue’s pupils, emerged as the clear leaders at the Pentagon’s Darpa Robotics Challenge 2013 Trials on Friday and Saturday.

Their team, called Schaft, completed the eight required tasks in the challenge almost flawlessly, losing points only because the wind blew a door out of its robot’s grasp and because the robot was not able to climb out of a vehicle after it successfully navigated an obstacle course.
The trials, held on the infield of the Homestead-Miami Speedway, included 16 teams that competed for a chance at a $2 million prize next year, and eight were selected to move on. The eight are now eligible for $1 million in support to help them prepare for the final event.
Gill Pratt, the Darpa program manager who is overseeing the Robotics Challenge, praised the scientist who paved the way for Team Schaft. “Dr. Inoue is a remarkable guy who really is the father of a lot of the stuff in Japan,” he said.

He also noted that the team of Japanese roboticists had a striking work ethic. Starting from an agency handout, the team had built three prototypes and were already testing the machines when Darpa officials visited Tokyo last summer. Dr. Pratt said the officials were expecting to see only plans.
“When we got there to do the site review and walked into their lab,” he said, “we were amazed.”
The students recently left the university to enter the Darpa contest and created the company Schaft. It has since been bought by Google as part of the company’s new robotics initiative.
The Darpa event has been described as a grand challenge to open the way for an era in which a generation of mobile robots will aid in disaster situations, traveling and working where humans cannot. The research agency is trying to develop systems that could be used in situations like the meltdown of the Fukushima Daiichi nuclear plant. The fact that there were no robots that could quickly be called upon in that emergency led to consternation in Japan, a nation that has prided itself on its advanced robots.
Darpa officials emphasized that the awards were not final, but were pending contract negotiations with the United States government.
IHMC Robotics from the Florida Institute for Human and Machine Cognition placed second. Third place went to Tartan Rescue, developed by the National Research Engineering Center at Carnegie Mellon University, and fourth place was awarded to a team from the Massachusetts Institute of Technology.
The fifth-place robot, RoboSimian, designed by NASA’s Jet Propulsion Laboratory, would have fared better, but the Darpa judges disallowed a clever solution the team had come up with for one of the tasks.
In a debris-clearing test, in which the robots were supposed to painstakingly remove a simulated pile of two-by-fours and a metal girder piece by piece, the humans on Team RoboSimian decided that removing the entire pile of debris at once would be the most efficient way toward the maximum points.
The RoboSimian robot was almost successful, but it did not get all of the material across a line until after the Darpa officials declared that the team had run out of time.

The incident suggested that there might still be room for human ingenuity in the robot era.
“That was our goal, to exploit human intelligence and give humans a tool,” said Max Bajracharya, the group leader and a member of the technical staff at the lab.
Although the robots were moving in slow motion, there was general agreement that the Darpa event was a watershed in the evolution of the technology, perhaps similar to the advent of the Homebrew Computer Club, which began the personal computer industry.
Marc Raibert, whose company, Boston Dynamics, demonstrated two of its agile and mobile robots, said he believed that the event signified merely a point in the evolution of a new industry. Still, he said, it was an event that would be remembered.
“This was a Woodstock for robots,” he said.
This article has been revised to reflect the following correction:

Correction: December 22, 2013
Because of an editing error, an earlier version of this article misidentified the institution that developed Tarten Rescue, which placed third in the Robotics Challenge. Tarten Rescue was developed by the National Research Engineering Center at Carnegie Mellon University, not the National Science Foundation’s Engineering Research Center at the university.
Japan Jonathan Kine Robotics