December 01, 2013
Inside the Postal Startup That Wants to Stick It to the (Mail) Man 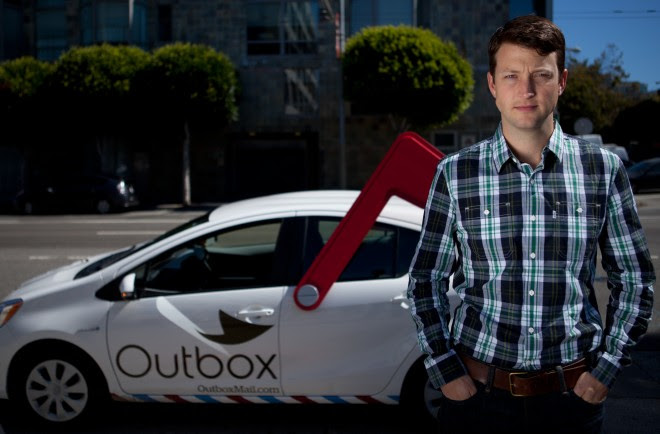 Evan Baehr, the co-founder of OutBox. Photo: Alex Washburn/WIRED
Evan Baehr was called to the postal service equivalent of the principal’s office.
More than a year ago, Baehr remembers, the startup he co-founded, Outbox, had worked out an agreement with the regional postmaster in its hometown of Austin, Texas to set aside mail addressed to the company’s customers. Instead of United States Postal Service carriers taking letters to individual mailboxes, Outbox would pick up the mail, open it, scan it, and make digital copies that customers could read via web or app.

Part of the trick was that the service could automatically weed out junk mail, and when U.S. Postmaster General Pat Donahoe got wind of this, he wasn’t happy — at least according to Baehr.
Donahoe summoned Outbox to his office, and Baehr made his pitch, arguing that the company was just a few smart guys with $2 million in financing who wanted to spend the next few years learning about Donahoe’s customers and even sending him data about what these customers needed. Donahoe responded by saying that the customers of U.S. Postal Service were not the general public. Its customers, he said, were a few hundred bulk mailers.

Outbox, which Baehr describes as “Dropbox for snail mail,” launches citywide in San Francisco today after six months of beta testing. An Outbox “Unpostman” will pick up your mail three times a week, and digital scans made in a secure warehouse are accessible via app on the web, Android, and iOS. If you like, you can even have some physical mail re-delivered. This arrives in one to two days, the company says.
Some critics have already lambasted Outbox as another perk for pampered techies willing to pay a monthly fee for a concierge service that solves something many people never saw as a problem. How hard is it, they ask, to open your mailbox yourself? Among the critics is Jay Leno, who made this point in his monologue around the time the Outbox beta debuted.
Baehr takes the jibes cheerfully but insists that trying to improve on the USPS as a civic good, as well as good business. “We started this company as frustrated citizens who have had a really frustrating communications experience with postal mail,” he says, mostly around missing mail as he and his family moved from town to town. 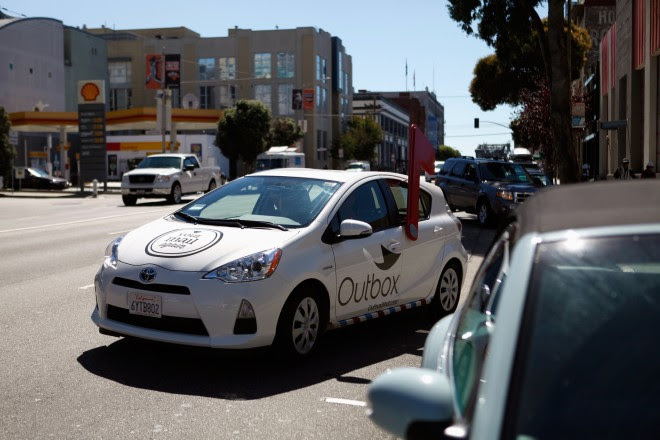 We went for a ride in an Outbox car. Photo: Alex Washburn / WIRED
After all, the mail isn’t just supermarket circulars, though it usually still seems that way. The Postal Service, in all its disarray, is still perhaps the leading channel through which the government communicates with citizens, and one of the most common ways business connects with customers (often in the form of bills). So the idea that such a service is so ripe for malfunction is far from comforting.
The USPS itself isn’t shy about sharing its frustration with Outbox. “The Postal Service is focused on providing an essential service in our mission to serve the American public and does not view Outbox as supporting that mission,” the agency said in a statement e-mailed to WIRED. “We do have concerns regarding the destruction of mail — even if authorized by the receiver — and will continue to monitor market activities to ensure protection of our brand and the value and security of the mail.”
If it’s a fight the post office wants, Baehr is clearly not one to shy away. His antipathy for big government is written all over his résumé. The Harvard Business School graduate has done work for the Manhattan Institute, the Heritage Foundation, and the Hoover Institute — libertarian bastions all. He also worked for famed libertarian tech tycoon Peter Thiel, a major investor in Outbox. Both he and co-founder Will Davis cut their teeth as legislative aides on Capitol Hill, but Baehr says Thiel helped instill in him the belief that business could be the best path to public service.
Though Outbox in no way presents itself as partisan, it’s hard to avoid the political overtones in the idea of a privatized postal service on top of a public utility. Especially in the San Francisco Bay Area, where protesters have recently camped out at the historic post office in downtown Berkeley to rail against the USPS’s plan to sell the building into private hands, mail delivery is just one more arena in which the battle between private and public, haves and have-nots, plays out.
At the same time, Outbox may be the most efficient way yet devised to avoid once and for all the delivery of corporate marketing propaganda to your door.

‘The Postal Service is focused on providing an essential service in our mission to serve the American public and does not view Outbox as supporting that mission.’
— The USPS
And, its founders say, Outbox’s core business ultimately isn’t really mail.
I recently rode along with an Unpostman on his daily rounds. Denis Gonzalez told me he makes about 110 stops daily, nearly as many as a UPS driver makes on an average day. “It’s a tough city to navigate,” Gonzales says. “There are a lot of intricacies.”
But Outbox believes a staff of city navigation experts such as Gonzalez combined with a phalanx of compact Priuses can outmaneuver its parcel delivery rivals in the shuttling of small packages around town. By staying in-city and keeping the packages below a certain size, Davis estimates its drivers can make 200 to 300 stops per day and connect with up to 500 residents daily, taking multi-unit dwellings into account. Outobox calls the concept “hyperlocal distribution” — a concentrated delivery network in which digitizing the mail is just one feature on top of a versatile logistics platform.
“We’re not focused on shipping things around the world. We’re focused on just your city.” Davis says.
Outbox’s ability to expand into a full-fledged distribution and delivery service could depend on how many people sign up for the mail service, which would give its fleet reason to expand. Or maybe parcels become the main business and digitized mail a nice add-on. Either way, as the Postal Service itself learned to its dismay in its losing battle with UPS and FedEx, mail may be nice but packages pay. It’s the American way.