We cannot allow this process to continue! We cannot! 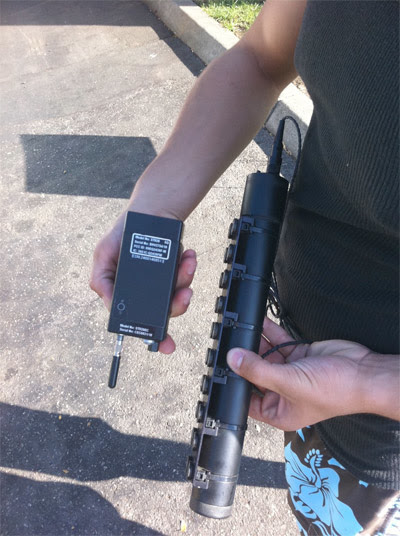 A California student got a visit from the FBI this week after he found a secret GPS tracking device on his car, and a friend posted photos of it online. The post prompted wide speculation about whether the device was real, whether the young Arab-American was being targeted in a terrorism investigation and what the authorities would do.

It took just 48 hours to find out: The device was real, the student was being secretly tracked and the FBI wanted its expensive device back, the student told Wired.com in an interview Wednesday.
The answer came when half-a-dozen FBI agents and police officers appeared at Yasir Afifi’s apartment complex in Santa Clara, California, on Tuesday demanding he return the device.
Afifi, a 20-year-old U.S.-born citizen, cooperated willingly and said he’d done nothing to merit attention from authorities. Comments the agents made during their visit suggested he’d been under FBI surveillance for three to six months.

An FBI spokesman wouldn’t acknowledge that the device belonged to the agency or that agents appeared at Afifi’s house.
“I can’t really tell you much about it, because it’s still an ongoing investigation,” said spokesman Pete Lee, who works in the agency’s San Francisco headquarters.

Afifi, the son of an Islamic-American community leader who died a year ago in Egypt, is one of only a few people known to have found a government-tracking device on their vehicle.
His discovery comes in the wake of a recent ruling by the 9th U.S. Circuit Court of Appeals saying it’s legal for law enforcement to secretly place a tracking device on a suspect’s car without getting a warrant, even if the car is parked in a private driveway.
Brian Alseth from the American Civil Liberties Union in Washington state contacted Afifi after seeing pictures of the tracking device posted online and told him the ACLU had been waiting for a case like this to challenge the ruling.
“This is the kind of thing we like to throw lawyers at,” Afifi said Alseth told him.

“It seems very frightening that the FBI have placed a surveillance-tracking device on the car of a 20-year-old American citizen who has done nothing more than being half-Egyptian,” Alseth told Wired.com.
Afifi, a business marketing student at Mission College in Santa Clara, discovered the device last Sunday when he took his car to a local garage for an oil change. When a mechanic at Ali’s Auto Care raised his Ford Lincoln LS on hydraulic lifts, Afifi saw a wire sticking out near the right rear wheel and exhaust.
Garage owner Mazher Khan confirmed for Wired.com that he also saw it. A closer inspection showed it connected to a battery pack and transmitter, which were attached to the car with a magnet. Khan asked Afifi if he wanted the device removed and when Afifi said yes, Khan pulled it easily from the car’s chassis.
“I wouldn’t have noticed it if there wasn’t a wire sticking out,” Afifi said.
Later that day, a friend of Afifi’s named Khaled posted pictures of the device at Reddit, asking if anyone knew what it was and if it meant the FBI “is after us.” (Reddit is owned by CondeNast Digital, which also owns Wired.com).

“My plan was to just put the device on another car or in a lake,” Khaled wrote, “but when you come home to 2 stoned off-their-asses people who are hearing things in the device and convinced it’s a bomb you just gotta be sure.”

A reader quickly identified it as an Orion Guardian ST820 tracking device made by an electronics company called Cobham, which sells the device only to law enforcement.
No one was available at Cobham to answer Wired.com’s questions, but a former FBI agent who looked at the pictures confirmed it was a tracking device.

The former agent, who asked not to be named, said the device was an older model of tracking equipment that had long ago been replaced by devices that don’t require batteries. Batteries die and need to be replaced if surveillance is ongoing so newer devices are placed in the engine compartment and hardwired to the car’s battery so they don’t run out of juice. He was surprised this one was so easily found.
“It has to be able to be removed but also stay in place and not be seen,” he said. “There’s always the possibility that the car will end up at a body shop or auto mechanic, so it has to be hidden well. It’s very rare when the guys find them.”

He said he was certain that agents who installed it would have obtained a 30-day warrant for its use.
Afifi considered selling the device on Craigslist before the FBI showed up. He was in his apartment Tuesday afternoon when a roommate told him “two sneaky-looking people” were near his car. Afifi, already heading out for an appointment, encountered a man and woman looking at his vehicle outside. The man asked if Afifi knew his registration tag was expired. When Afifi asked if it bothered him, the man just smiled. Afifi got into his car and headed for the parking lot exit when two SUVs pulled up with flashing lights carrying four police officers in bullet-proof vests.

The agent who initially spoke with Afifi identified himself then as Vincent and told Afifi, “We’re here to recover the device you found on your vehicle. It’s federal property. It’s an expensive piece, and we need it right now.” Afifi asked, “Are you the guys that put it there?” and the agent replied, “Yeah, I put it there.” He told Afifi, “We’re going to make this much more difficult for you if you don’t cooperate.”
FBI Illegal surveillance Spying surveillance