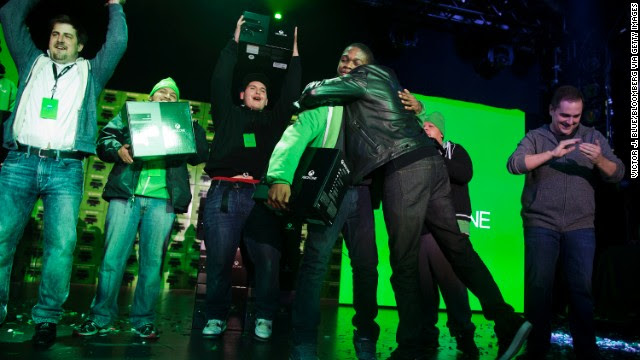 Fans cheer the release of Xbox One at a Microsoft launch event early Friday in New York.
STORY HIGHLIGHTS
(CNN) -- Arieo Gonzalez had been waiting for an Xbox One since 1 p.m. Thursday. Brian Miller, in his own way, had been waiting since June.

Both walked away from a Best Buy in Timonium, Maryland, early Friday with one of the newly released, next-generation gaming consoles from Microsoft.

The box hit shelves a week after rival Sony's PlayStation 4, marking the official start of the latest battle in gaming's console wars.
Console smackdown! PlayStation 4 vs. Xbox One
Miller, 40, who pre-ordered the Xbox One in June, said he loves everything Microsoft does. The Sparks, Maryland, resident prepared by playing his Xbox 360 "into the ground" with his 8-year-old daughter, Laci.
"We play co-op all the time whenever there is a chance," he said. "I'm picking up 'Ryse' for myself. I'm getting 'Just Dance' for her. I can't wait to try out the new entertainment set up for it."
Arieo waited outside the store with his dad, Jose. The 13-year-old missed out on pre-ordering but didn't want to lose his chance for an Xbox One after making good grades in school and earning the right to get the console.

"I've only played Xbox 360 and didn't have the Kinect," Arieo said. "This will be my first time, and I'm really looking forward to using it. Xbox One On!"

The Xbox One, which sells for $499, continues Microsoft's move toward making the console not just a gaming device but a central entertainment hub, too. With the Kinect voice and motion controller, users can call out favorite television shows or movies, split the TV screen between two different applications, or even record and share their gameplay with friends.
Marc Whitten, corporate vice president of Xbox Live, said it's only the beginning of how Microsoft thinks people will use their consoles as home entertainment centers.
"One of the things that has been just so amazing for the Xbox One is the passion of the fans about play and Xbox Live," Whitten told CNN in a pre-midnight interview. "Everything we do is really about how we build new experiences for them. It's awesome."

Whitten said Kinect, originally promoted as a tool for hands-free gaming, is increasingly becoming a focal point for the entire Xbox system.Jason Gelatka of Towson, Maryland, said the device is the biggest draw for him.

"It is more than just gaming. It is the multimedia experience," he said. "I'm looking forward to just calling out my movie or pulling up Netflix with my voice. It is a giant universal remote control."
Gelatka also pre-ordered his console this summer. He and his friends treated the midnight launch like opening night of a sports season or Hollywood blockbuster.
"We've been talking with each other, texting each other since we ordered. It really made the wait harder," Gelatka said. "Today was the longest day ever."
Crowds rivaling those for last week's PlayStation 4 rollout lined up for the Xbox launch in 13 countries. In New York's Times Square, a concert featuring hip-hop artist Macklemore was part of the launch event.
Early controversies, including concerns about the ability to resell and share games on the system, didn't appear to have hurt the turnout.
But Miller said he was a bit bummed about the lack of a selection of games for launch, and Gelatka agreed.

"The Day One lineup of games is not fantastic," Gelatka said. "I'm confident though. They haven't reached their peak and better games are out there waiting to be made. Xbox has always listened to what I wanted. That's why I'm getting the Xbox One."
Jonathan Kine Xbox