November 28, 2013
The Future of Cloud Computing Now Runs on All Versions of Linux 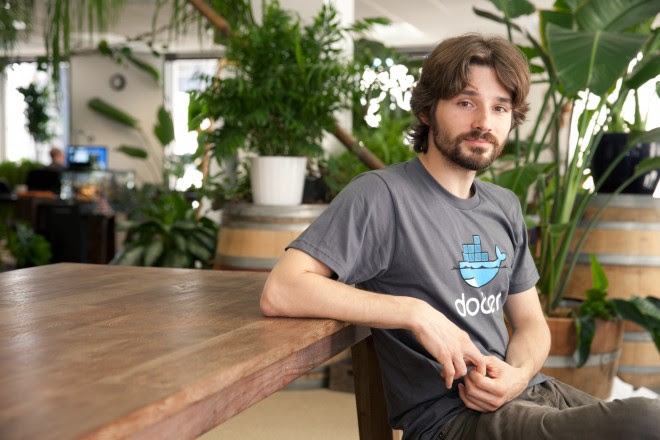 Solomon Hykes, the developer behind Docker. Photo: Alex Washburn/WIRED
Docker wants to help developers run their applications anywhere and everywhere. This week, the project got a little closer to that goal by bringing the platform to all major versions of the Linux operating system.
Docker is a tool for bundling everything you need to run a particular application into a single “container.” These containers can be moved from computer to computer — be they physical machines or virtual computer servers — in much the same way a standardized shipping container can be loaded onto any ship or train or loading dock.

Each container runs in isolation of all the other containers on a computer. The idea is to make each application completely portable, eliminating the need to install and configure it on every system on which you run it. It’s not a new idea, but Docker has popularized the approach and has even spawned an operating system designed specifically to work with it called CoreOS.
But up til now, Docker has only been supported on the Debian distribution of Linux. It was possible to install Docker on other Linux distributions, but that could be a tedious affair. But thanks to the latest release — version 0.7 — Docker is now supported on all major Linux distributions, including Fedora, Red Hat Enterprise Linux, Ubuntu, Suse, Gentoo, and Arch Linux.

The new release follows the announcement last October that DotCloud, the company that developed Docker, would change its name to Docker and focus on the containerization software instead of cloud hosting. The company also announced a partnership with Red Hat in September to bring Docker to Red Hat’s operating systems and the OpenShift platform-as-a-service. Thankfully, the company brought it to other Linux platforms as well.
Other new features in Docker 0.7 include support for more storage drivers, offline transfers and communication between containers.

The next steps, Docker creator Solomon Hykes writes on popular developer hangout Hacker News, is getting Docker to run on 32-bit operating systems, and improved support for running Docker on the ultracheap Raspberry Pi computing system.