Teaching an old master new tricks: How the iPad inspired David Hockney, 76, to use new technology to create his latest artworks

November 29, 2013
Teaching an old master new tricks: How the iPad inspired David Hockney, 76, to use new technology to create his latest artworks
Updated by Endah

Teaching an old master new tricks: How the iPad inspired David Hockney, 76, to use new technology to create his latest artworks

51 shares
27
View
comments
David Hockney, known as one of the most versatile artists of the 20th century, has embraced tablet technology for his latest exhibition.
The 76-year-old has always been interested in experimenting with new techniques, but the launch of the iPhone and iPad has taken his work to a new level.
A San Francisco gallery is exhibiting work Hockney has created on the devices in the past ten years as he shows how technology has influenced artists for centuries. 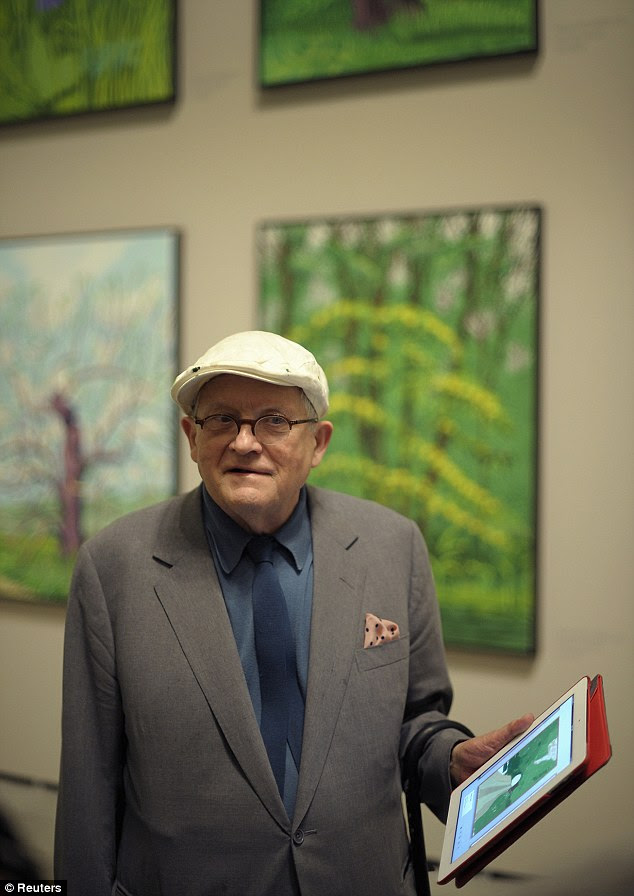 Modern art: David Hockney with an iPad showing one of his Bigger Exhibition works

The most up-to-date work on show at de Young Museum is a series of 12ft prints, entitled Bigger Yosemite, which Hockney created on an iPad.
His experimentation with the smart technology began with the iPhone, which allowed him to make sketches with his thumbs, but the release of the iPad expanded his possibilities.
'I do think it is a new medium. I found it more interesting than Photoshop because you can pick up a color from another color. And you can work very fast. And that's something every draftsman is interested in,' Hockney told the Los Angeles Times.

The iPad's mobility also appealed. It fitted comfortably in the pockets he has sewn into his jackets for his sketchbooks, and it meant he no longer needed to carry around paints and pencils.
The speed of the creative process has made the last year one of the most prolific in the artist's long career.
'His use of the iPad has gone way beyond sketching on the screen to become a core part of his creative process,' according to the audio tour that accompanies the exhibition. 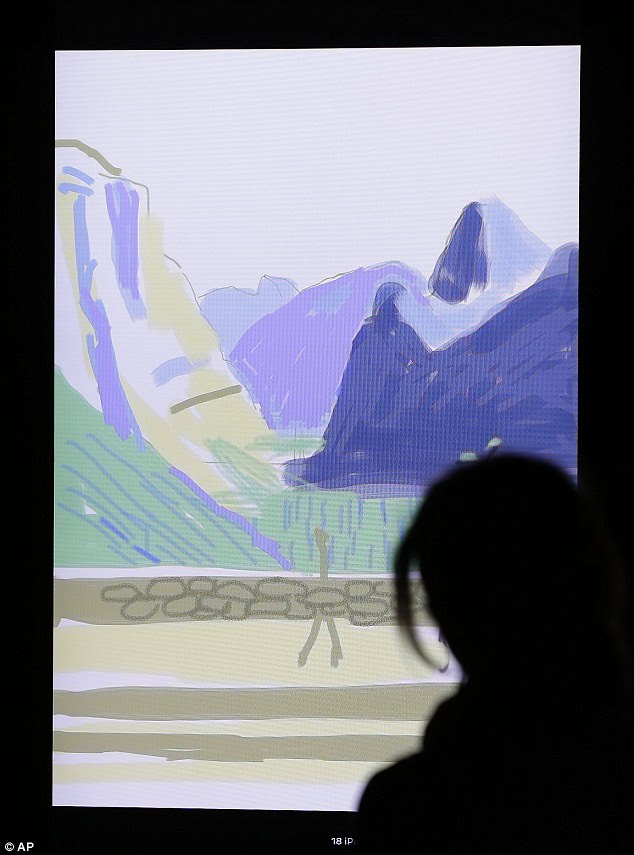 Bigger picture: A screen shows how Hockney's painting of Yosemite National Park was developed on an iPad 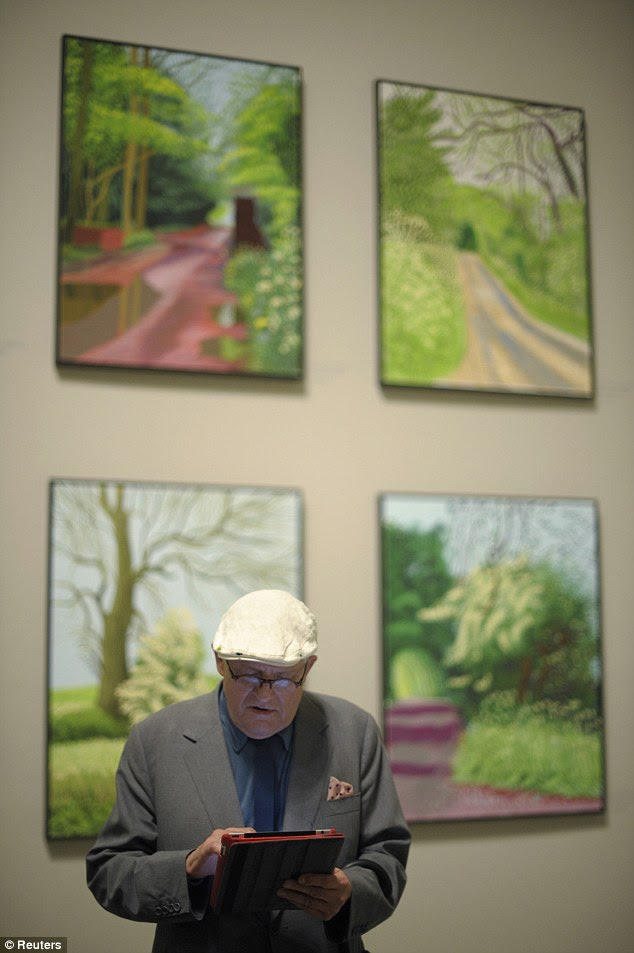 Inspired: Hockney with his work in Bilbao's Guggenheim. The size and mobility of the iPad allows Hockney to sketch easily anywhere

The British artist, who has a studio in California, has always been intrigued by new media. When photocopiers were first released Canon used to send him ink cartridges to experiment with.
At the end of the 90s Hockney began to research how old masters had used optical devices to improve their technique and perspective, CNN reported.
He discovered that 19th century artists had used technology such as the camera lucida - a small prism on a metal arm that let them refract an image on to canvas.
Hockney's research, and subsequent book - Secret Knowledge: Rediscovering the Lost Techniques of the Old Masters - has resulted in the latest exhibition which includes work created on iPads and video cameras, as well as more traditional methods.
'Like an artist alchemist, in one minute Hockney uses a fancy digital device to make a colorful iPad drawing; in the next he shows us that he is one of our greatest draftsmen by rendering an exactingly detailed charcoal drawing of a forest scene in East Yorkshire,' Richard Benefield, of the Fine Arts Museums of San Francisco, said. 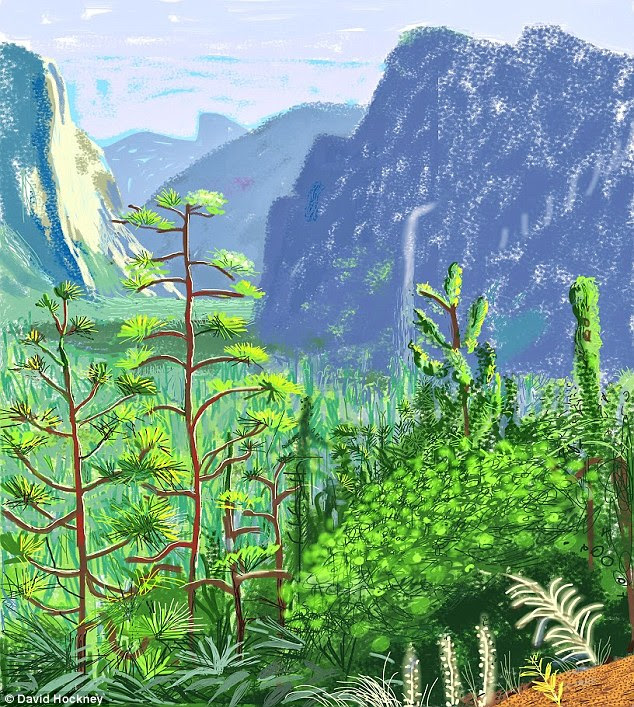 Creative: Yosemite I, October 16th 2011 is one of the images Hockney created on his iPad 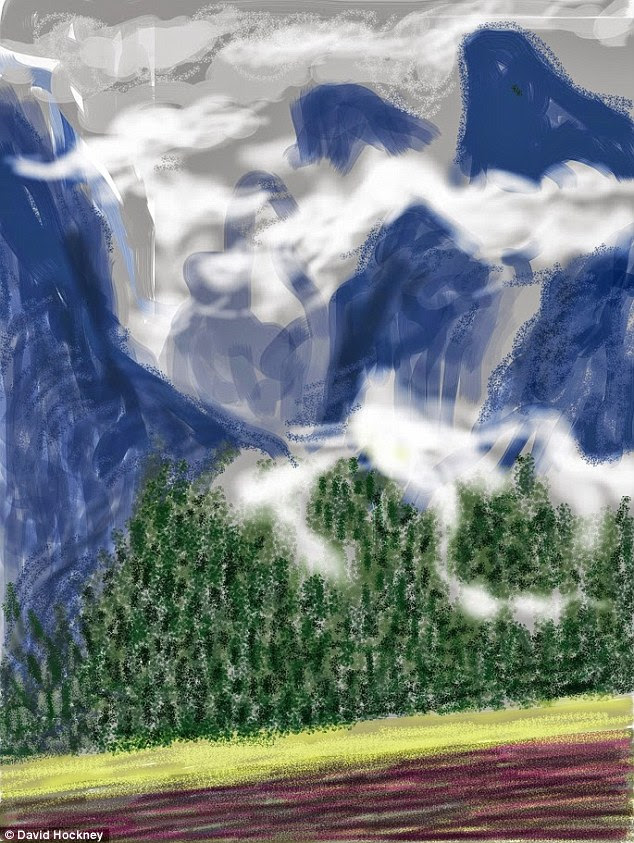 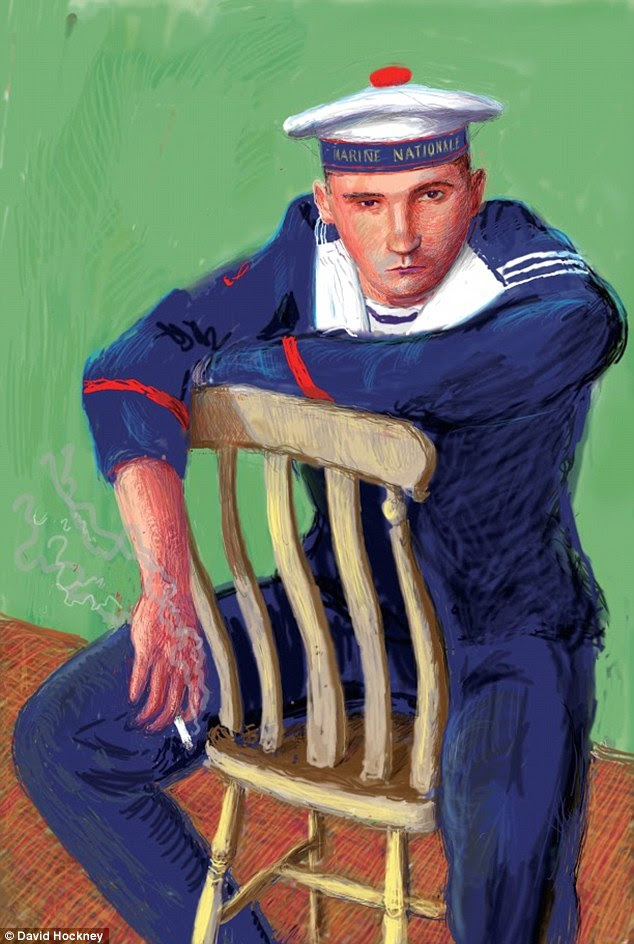 New media: The picture, A Bigger Matelot Kevin Druez 2, was created in 2009 as an Inkjet printed computer drawing 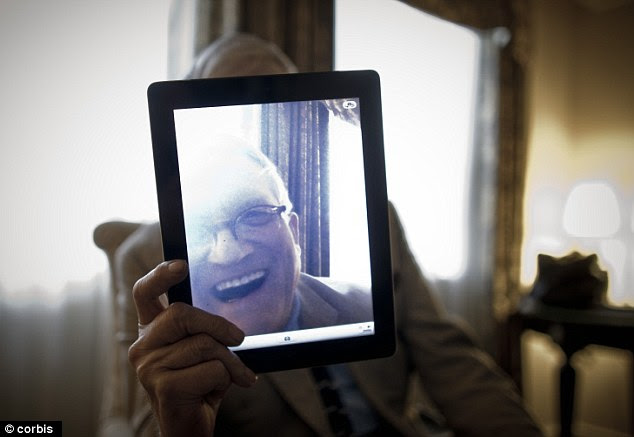 Selfie: The British artist has always embraced new technology, but the iPad has opened up more possibilities

Part of the exhibition charts the history of art in a huge piece entitled The Great Wall. The 8ft by 72ft work is a chronological history of how optical aids have influenced western art.
Included among the sketches and paintings, on show until January 20, are four sets of screens showing footage of the same country road in the changing seasons.
Hockney created it by mounting video cameras on a vehicle, which he controlled as a studio assistant drove along the road.
'It’s clear from the pace at which Hockney continues to produce such important work - and the fearless nature of his innovation - that he has conceded nothing to his 76 years,' Mr Benefield said.