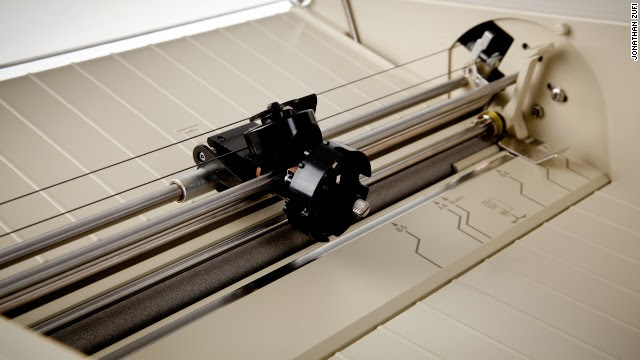 In his coffee-table book "Iconic," Jonathan Zufi shares photographs of nearly every Apple product ever created. It showcases many long-forgotten products, like this color plotter from 1984.
HIDE CAPTION
35 years of Apple design
<<
<
1
2
3
4
5
6
7
8
9
10
11
12
13
14
>
>>
STORY HIGHLIGHTS
(CNN) -- A self-professed Apple fanatic, Jonathan Zufi was looking for a book of photography profiling the company's products through the years.

When he didn't find one, the Atlanta software engineer decided to make one himself.
"Iconic: A Photographic Tribute to Apple Innovation" is the result. Released last month, the hardcover, coffee-table book contains 350 pages of photos documenting nearly every product the company has ever made.

Apple has long been unapologetically focused on design and Zufi, a native of Melbourne, Australia, said he wanted to celebrate that with his images.
"Other companies came up with the guts for a machine and then the engineers would find a way to stuff them into a box," said Zufi. "Steve Jobs started with the box and said, 'You need to find a way to get the guts in.' "
The book, currently available only through its website, sells for $75, or $300 for a special edition which, along with other extras, comes with a custom-fit book case designed in a retro style inspired by Apple products of the 1970s and '80s.

It's all an unlikely project for a software engineer with no formal photography training. Zufi bought new equipment and consulted with a professional as he began the project, which was four years in the making.
All along, he focused on shooting artistic images that didn't resemble promotional product shots.
"I didn't want to take photos that you could find in marketing material," he said. Instead, he said he approached each shot by looking for an image that would "create that same emotional connection to that product, but maybe doesn't look like something you've seen before."
For example, when shooting the first version of the iPhone, released in 2007, he chose an image of the back of the phone.

"I don't really remember seeing a lot of the photos of the back," he said. "It's little things like that."
Zufi, who began sharing his images on the website Shrine of Apple, said he hasn't had any official communications with Apple about the book.
"I didn't even try to reach out. I knew that it probably wouldn't get anywhere," he said.
"I can tell you there's been an enormous outpouring of support and enthusiasm from employees. People at the company are buying the book -- they're buying it for themselves, they're buying it for their friends ... . That feedback is obviously very gratifying."

No less of an authority than Apple co-founder Steve Wozniak wrote a foreword to the book.
"
Within these pages, Jonathan presents a thoughtful and artistic gift to Apple fans and employees alike; photographs of Apple products -- from hardware to packaging -- the likes of which I've never seen compiled before," he writes. "Jonathan's passion for this project is reflected on every page, and each honors the hard work of every employee and collaborator that has passed through Apple's doors."