Take a Tour of #Robocoin, the World’s First #Bitcoin ATM

Take a Tour of Robocoin, the World’s First Bitcoin ATM

VANCOUVER, Canada — Meet the Robocoin: the world’s first bitcoin ATM. It went live last night, after an afternoon of tinkering and testing at the downtown cafe that’s now its home.
The Robocoin isn’t like other ATMs. It doesn’t take debit or credit cards. It’s a cash-only machine. You put your money in, and it gives you numbers — addresses that link to bitcoins, the world’s most popular digital currency. Or, if you already own some bitcoins, the machine can scan a QR code on your mobile phone and dispense cash.

It’s yet another sign that Bitcoin, created just over five years ago, is moving out of the realm of computer geeks and into the mainstream

The Nevada guys who built Robocoin tested it out at a San Jose, California, convention last May, but this is the first time they’ve installed one of their machines in a permanent fashion. It’s yet another sign that Bitcoin, created just over five years ago, is moving out of the realm of computer geeks and into the mainstream.

Bitcoin is a system controlled a network of machines spread across the internet. When you buy a bitcoin, you’re essentially buying cryptographically protected numbers that you can then move around using a global, peer-to-peer network of computers. It’s money, but it moves as easily as email.

Bitcoins sprung into the public spotlight as the default currency for The Silk Road, a online drug marketplace that was shut down earlier this month. But today, you can use bitcoins at a small but growing number of businesses. You can pay for a cab in San Francisco, or a pint of beer in London or a caffe macchiato here at the Waves Coffee House in Vancouver, where the first Robocoin is nestled right next to the coffee bar.
To the Canadian investors who bought this first Robocoin — three men who met in a high school and have since gone on to found a bitcoin trading store in Vancouver called Bitcoiniacs — Robocoin will let people to buy and sell bitcoins without going through some of the hoops that are required by Bitcoin exchanges. “The point of the store was to make it easier for everyone to buy bitcoins,” says Bitcoiniac co-founder Jackson Warren. “We saw the ATM as a way to expand the model of the store.”

You don’t need a bank account to use Robocoin and, at least in Canada, you don’t need any identification. The U.S. version of the machine will have more stringent identification requirements. But even the Canada model is rather complicated. It takes a scan of your palm and matches that to a database to ensure that you’re not buying more than CDN$3,000 per day — means of deterring money launderers — and then the machine connects to a back-en Bitcoin exchange to buy and sell your coins in realtime. 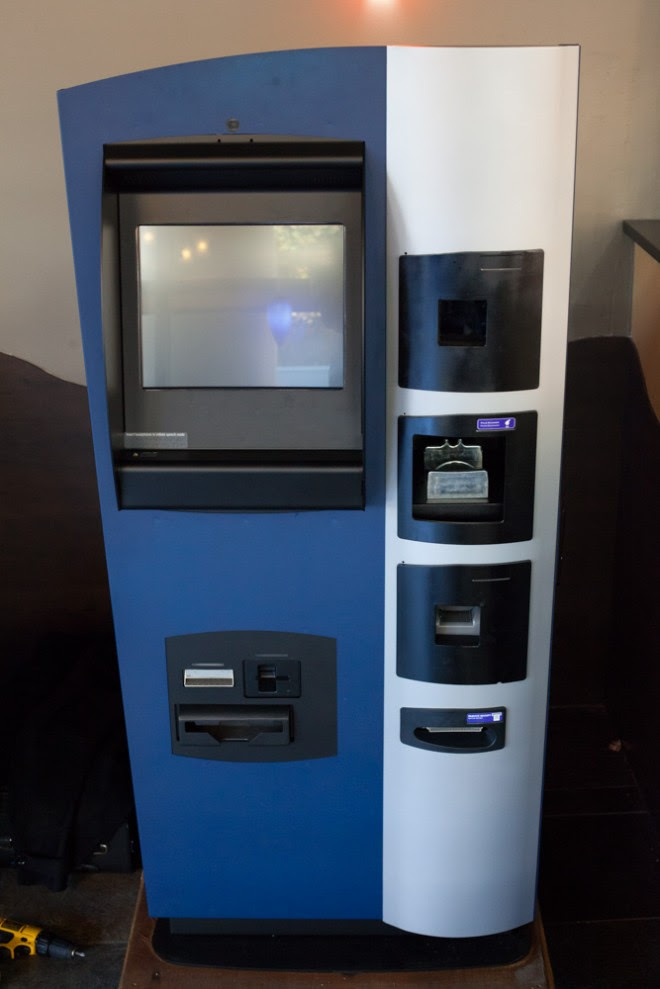 The world’s first bitcoin ATM. Photo: David Ryder/WIRED
Robocoin’s inventor, John Russll says that connecting with the back-end exchanges is his biggest worry. During testing Monday, the BitStamp exchange that this machine uses went down temporarily, rendering the ATM unusable for a few minutes. Then there were the kinds of problems you’d expect when booting up any first-of-its kind machine. The ATM’s Windows software booted up in safe mode, and that sent Bitcoiniacs co-founder Jackson Warren off on an errand looking for a keyboard. The receipt printer didn’t work at first, and later, a plastic cover on the machine’s palm reader had to be removed. Then there was the tweaking and software adjustments that kept the machine’s creators and operators busy for about seven hours Monday.
Apparently, this is what it takes to make bitcoin history.
In most states, you need to have a money transmission business license in order to operate one of these machines. But in Canada things are a little bit different. Here, a simple bitcoin for cash trade is not a money transmission. The Bitcoin is “neither funds, nor the currency of a country,” says Peter Lamey, a spokesman with Canada’s regulatory agency, the Financial Transactions and Reports Analysis Centre. The agency does have requirements for money services businesses, but unless the bitcoin company is involved in converting Canadian dollars to cash in some other jurisdiction, they are not subject to this regulation, Lamey says. “Just operating a private-label ATM isn’t subject to the requirements.”

Although the Robocoin user interface is still rough and not exactly easy to use, bitcoin’s supporters are excited about the machine. “I think it’s great for bitcoin because it increases access to bitcoin for the mainstream public,” says Patrick Murck, the lawyer for the Bitcoin Foundation, a nonprofit group that maintains the core bitcoin software and advocates for the digital currency. He expects to see bitcoin ATMs in the U.S. soon.

At around six p.m. Monday, a man named Jason Lamarche dropped by the coffee shop. He then waited patiently for more than three hours until the machine was fully ready to go, wanting to be the first to use it. He slid in a $20 bill, and in less than a minute, he had his tenth of a bitcoin, which he promptly used at the coffee bar to buy a steamed milk with vanilla (this Waves Coffee House accepts bitcoins). “It was amazing,” he said of the Robocoin. “It was super convenient. It was easy to use.”
Lamarche asked that we not mention the name of his employer, but he did tell us what he does for a living. He’s an account manager at a bank.
ATM Bitcoin CIO Jonathan Kine