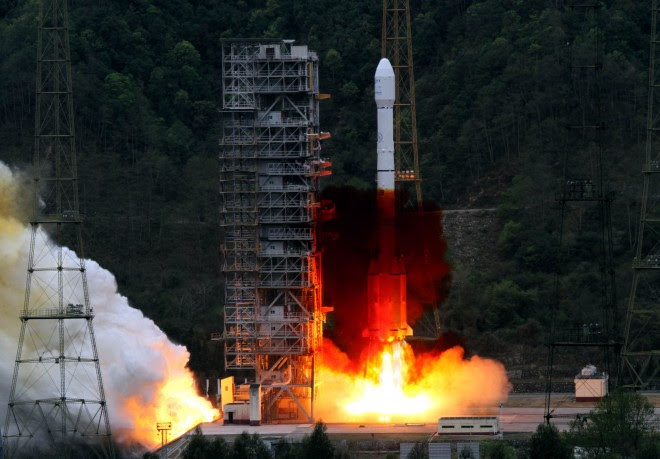 Updated 5/2 9:44 a.m.
The Pentagon is so starved for bandwidth that it’s paying a Chinese satellite firm to help it communicate and share data.

U.S. troops operating on the African continent are now using the recently-launched Apstar-7 satellite to keep in touch and share information. And the $10 million, one-year deal lease — publicly unveiled late last week during an ordinarily-sleepy Capitol Hill subcommittee hearing — has put American politicians and policy-makers in bit of a bind. Over the last several years, the U.S. government has publicly and loudly expressed its concern that too much sensitive American data passes through Chinese electronics — and that those electronics could be sieves for Beijing’s intelligence services. But the Pentagon says it has no other choice than to use the Chinese satellite. The need for bandwidth is that great, and no other satellite firm provides the continent-wide coverage that the military requires.
“That bandwidth was available only on a Chinese satellite,” Deputy Assistant Secretary of Defense for Space Policy Doug Loverro told a House Armed Services Committee panel, in remarks first reported by InsideDefense.com. “We recognize that there is concerns across the community on the usage of Chinese satellites to support our warfighter. And yet, we also recognize that our warfighters need support, and sometimes we must go to the only place that we can get it from.”

The Apstar-7 is operated by Hong Kong-based APT Satellite Holdings Ltd. One of that company’s largest shareholders is the state-controlled China Satellite Communication Company, which counts the son of former Chinese premier Wen Jiabao as its chairman. But the Pentagon insists that any data passed through the Apstar-7 is protected from any potential eavesdropping by Beijing. The satellite uplinks and downlinks are encrypted, and unspecified “additional transmission security” procedures cover the data in transit, according to Lt. Col. Damien Pickart, a Defense Department spokesperson.

“We reviewed all the security concerns, all of the business concerns with such a lease,” Loverro said. “And so from that perspective, I’m very pleased with what we did. And yet, I think the larger issue is we don’t have a clear policy laid out on how do we assess whether or not we want to do this as a department, as opposed to just a response to a need.”

Every new drone feed and every new soldier with a satellite radio creates more appetite for bandwidth — an appetite the military can’t hope to fill with military spacecraft alone. To try to keep up, the Pentagon has leased bandwidth from commercial carriers for more than a decade. And the next decade should bring even more commercial deals; in March, the Army announced it was looking for new satellite firms to help troops in Afghanistan communicate. According to a 2008 Intelligence Science Board study (.pdf) — one of the few public reports on the subject — demand for satellite communications could grow from about 30 gigabits per second to 80 gigabits a decade from now.

The Chinese are poised to help fill that need — especially over Africa, where Beijing has deep business and strategic interests. In 2012, China for the first time launched more rockets into space than the U.S. – including the Chinasat 12 and Apstar-7 communications satellites.

Relying on Chinese companies could be a problematic solution to the bandwidth crunch, however. U.S. officials have in recent years publicly accused Chinese telecommunications firms of being, in effect, subcontractors of Beijing’s spies. Under pressure from the Obama administration and Congress, the Chinese company Huawei was rebuffed in its attempts to purchase network infrastructure manufacturer 3Com; in 2010, Sprint dropped China’s ZTE from a major U.S. telecommunications infrastructure contract after similar prodding. Last September, executives from the Huawei and ZTE were brought before the House intelligence committee and told, in effect, to prove that they weren’t passing data back to Beijing. “There’s concern because the Chinese government can use these companies and use their technology to get information,” Rep. Dutch Ruppersberger, said at the time. The executives pushed back against the charges, and no definitive links to espionage operations were uncovered. But the suspicion remains. And it isn’t contained to these two firms.

“I’m startled,” says Dean Cheng, a research fellow and veteran China-watcher at the Heritage Foundation. “Is this risky? Well, since the satellite was openly contracted, they [the Chinese] know who is using which transponders. And I suspect they’re making a copy of all of it.”

Even if the data passing over the Apstar-7 is encrypted, the coded traffic could be used to give Chinese cryptanalysts valuable clues about how the American military obfuscates its information. “This is giving it to them in a nice, neat little package. I think there is a potential security concern.”
And even if the Chinese don’t intercept the data, there’s always the danger of them suddenly deciding to block service to the American military.

For his part, Loverro says the Department of Defense will be reviewing its procedures to ensure that future satellite communications deals both let troops talk and let them talk in private. The Pentagon will get another opportunity shortly: the Apstar-7 deal is up on May 14, and can be renewed for up to three more years.