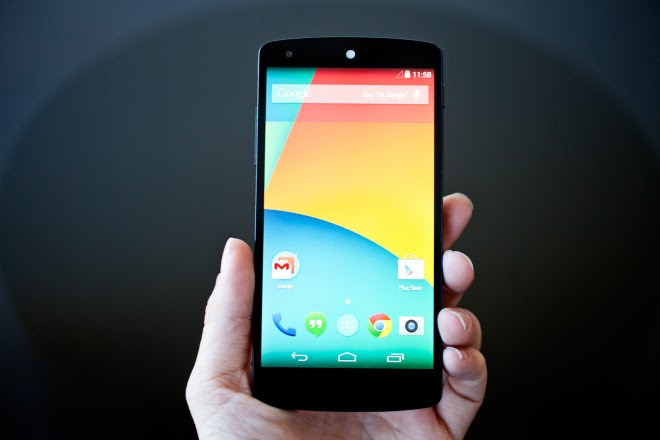 Google showed off its new Android version 4.4 (or KitKat) operating system, running on a new flagship phone, the Nexus 5. Google uses its Nexus line to show off its new operating systems, and the device and OS are reflections of each other. Seen together, they reveal a Google that is boundlessly ambitious and aiming to take on the world with the things only it can do.

Sundar Pichai, who runs Android and Chrome for Google, says that KitKat has three major themes, which can be summarized as growth, design, and smarts. After crossing the billion activations mark, it now wants an operating system that works for the “next” billion people with Android devices. It wants something that’s beautiful and design-forward that’s pleasant to look at and intuitive to use. And it wants the experience of the phone to take advantage of what Google can do. All of these are major themes of the Nexus 5 as well.

Let’s start with the phone. The Nexus 5, developed with LG, has one driving purpose, which is to serve as a showcase for the operating system. To do that it needs to be something you want to use all the time, every day. Google mostly pulled this off. The phone is nice and light at 4.59 ounces. The specs are also solid. It has a 4.95-inch 1920 x 1080 HD display that has a 445 ppi pixel density, made from Corning Gorilla Glass 3. For taking images rather than viewing them, it has a 1.3 MP front-facing cam and 8MP rear camera. There’s a 2.26 GHz Qualcomm Snapdragon 800 CPU, 2 GB RAM, dual band Wi-Fi, NFC, and Bluetooth 4. All the stuff you’d expect. There are also nice extra touches as well, like an optical image stabilization feature lets you take sharp photos even with a shaky hand — this worked very well when we tried it out. To reach those next billion users, it’s launching in 10 countries, designed to run globally on all manner of networks. There is one model designed for North America, and another for the rest of the world. The Nexus 5 goes on sale today. Without a contract, the 16 GB model costs $349, and the 32 GB model is $399. 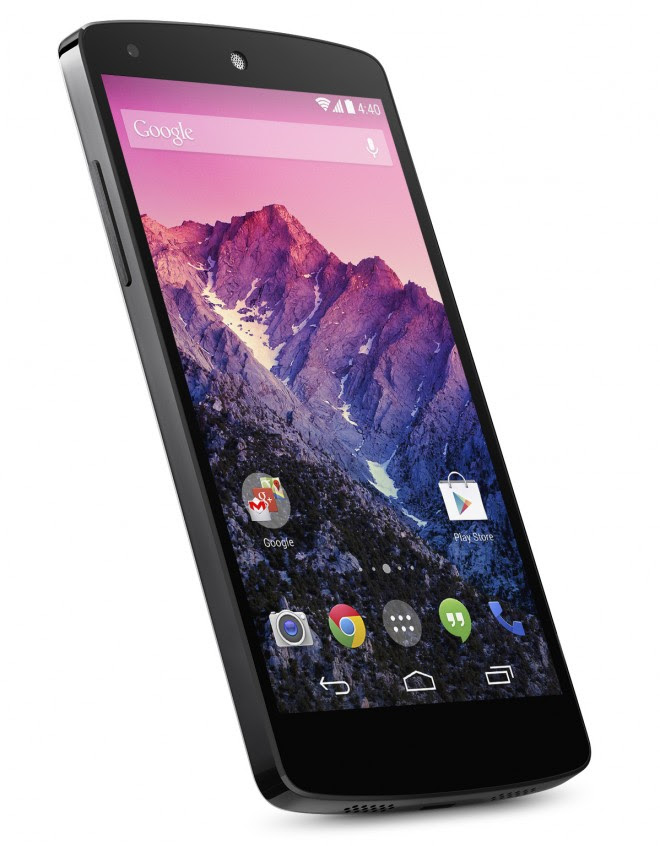 Image: Google
In terms of pure aesthetics, The Nexus 5 is very nice looking, but not striking in the way that, say, the HTC One or Gold iPhone 5S are. You can get it in white or black. There are no buttons across the bottom to add clutter. The logo melts into the backside. It’s not going to make people notice it, but it’s pleasant to look at.
Likewise, KitKat’s design has some pleasant features to help you make it prettier, and make it your own. You can rearrange your home screens (not just the apps on them, but the order of the screens themselves)–Google cited maybe having a weekday and weekend setup as a reason you may want to do this. When you’re playing music, the entire lockscreen will show album art.
But mostly, this phone is about KitKat, and KitKat is about What Google Knows.
The dialer, for example, takes advantage of Google’s database when making calls. Rather than looking up a number in search, and then dialing, you can simply say the name of a restaurant and Google will present you with options to call it, based on the ones in your area. If a business calls you, it shows the company’s name — both of these features work even if the business is not in your address book. The camera’s HDR function is fantastic in weirdly lit situations to get the most out of color and range. Google Hangouts offer a unified place for both SMS and chat, and make location sharing as easy as tapping the screen. Just hit a location icon in Hangouts to tell your friend where you are. Because onboard storage is finite, Google added API tools developers can hook into so users can pick and choose photos and files to send not just from the Gallery, but also cloud providers like Box or Google Drive. It means you can offload your photos and still easily access them from within apps.

Google Now has also gotten some fancy new tools. It lives on the home screen of the Nexus 5; just swipe all the way to the left and there it is, waiting for you with mind boggling anticipation. It takes advantage of location to show you the things other people are searching about in any particular area. In the example it showed, visitors to Yellowstone will automatically be shown a card for the times the geysers are erupting; in Austin they see when they can view bats in flight. This is a fantastic way to use location to show you things you want to know before you have to ask for them. If you regularly visit particular websites, it will show you important updates from those sites. (But not, it promises, every single story that the New York Times publishes in a day.) If you search for news about Walking Dead a lot, relevant news updates will just appear in Google Now. This is just going to get bigger.
And then there is Search. From the home screen, just say “Okay Google” to launch search–it doesn’t work from a locked device like the Moto X, but this should still be a nice feature for using the phone in the car. But the most intriguing thing Google showed today was KitKat’s ability to search within apps and display that information in regular search results. Search for a restaurant, for example, and Google will return the normal results–but also will show you an option for OpenTable. Click it and the app launches, right to the restaurant’s page, so you can make a reservation. It’s launching this with 10 partner apps, but promises that any developer will be able to take advantage of the API, let Google crawl its data, and work right from search. To begin with, Google will only show you data from installed apps, but expects to expand this to show any relevant application, with an option to install the app from Play if you don’t have it. Apps are just a way to display information — to connect it and present it. This lets Google start knocking down the barriers from you accessing that information anywhere, while still allowing others to present it to you. It’s very promising, and something we’ve wished for.

Google also lets you give and take with Search now. You can refine it. In today’s demonstration, it showed an example of a voice query for “Boston Red Sox pitchers.” Search misidentified “pitchers” as “pictures,” and returned results for that instead. But by tapping the word “pictures,” it presented other similar-sounding options, including the right one. One tap later, and the right results are there. More intriguing was a command to “text Jennifer.” Search responded by asking “which Jennifer?” and then “mobile or work?” After identifying the right person and number, it says “what’s the message” and then gave an opportunity to review it before sending. It was just super-smart.

But maybe the smartest thing of all is how Google is looking at the rest of the world. One of the problems Google faces with Android is that most people in emerging markets–where it’s hoping to snag those next billion users–run low-end handsets that have 512 MB of memory or less. Because of this, said Pichai, most of the new handsets sold in emerging markets run version 2.3 of the Android operating system (or Gingerbread). KitKat was designed specifically to work on those lower-end devices without much elbow room for memory. The OS reduces memory consumption, Google’s default apps have been tuned to use less memory, and the system can flush out processes that get very large. Additionally, the API exposes that a device is running on a phone without much memory, so developers can customize their apps to use fewer resources in those situations.

All told, both KitKat and the Nexus 5 are iterative, as almost all the new phones we see today are. But Google’s attempt to knock down the walls between search and applications, to rethink the way information flows not just in one direction but back and forth in the context of where you are and what you want, feels an awfully lot like the early stage of a new revolution.
Photos: Ariel Zambelich/WIRED