Can IBM Watson beat Google to become the new king of search?

Google in Jeopardy: What If IBM’s Watson Dethroned the King of Search?


Remember Watson, IBM’s Jeopardy champion? A couple years ago, Watson beat the top two human champions Ken Jennings and Brad Rutter at a game where even interpreting the cue is complex with language nuances. (Not to mention finding answers at lightning speed on any subject matter.)
Yet after the initial excitement, most people – except for a notable few – forgot about Watson. But we need to pay attention, and now. Because Watson heralds the emergence of “thinking machines” capable of knowledge creation that will trump today’s knowledge retrieval machines. This could be the beginning of a serious challenge to Google, whose most ambitious initiatives — from wearables to cars to aging — are funded through its thriving advertising business.

Watson was arguably the first computer ever to pass the Turing Test, designed by British mathematician Alan Turing to determine whether a computer could think. Turing argued that it was too hard to define “thinking,” but that a computer could be considered “intelligent” if a human interlocutor is unable to distinguish which of two entities being questioned is a machine and which is a human. Vasant Dhar is co-director of the Center for Business Analytics at the Stern School of Business at NYU and head of its Information Systems Group. His areas of research include predictive analytics and data governance, and he teaches on trading strategies among other topics. Dhar helped bring machine learning to Wall Street in 1994 at Morgan Stanley, and he created the first hedge fund based on data-driven decision making.

If you had a choice between asking a question to a Jeopardy champion and a search engine, which would you choose – Watson or PageRank? One obvious answer to who has the upper hand is that it depends on what people value more: retrieving information or solving problems. But information retrieval is part of problem solving. If IBM did search, Watson would do much better than Google on the tough problems and they could still resort to a simple PageRank-like algorithm as a last resort.

Which means there would be no reason for anyone to start their searches on Google. All the search traffic that makes Google seemingly invincible now could begin to shrink over time.

To put this in perspective: Back in the 1990s, we were pleasantly surprised when a computer returned anything even remotely related to what we wanted when we typed a query into search engines like Altavista, Lycos, or Excite. But that was because our expectations for computers were very low then. When Google came along with its PageRank algorithm for gauging relevance of a free-form text query to web pages, it cornered the search market.

Today, more than 90 percent of Google’s current revenues are from sponsored search. Advertisers want to be where people search.

Google continues to top the search game with the mission of “organiz[ing] the world’s information and mak[ing] it universally accessible and useful.” But now this mission is limited given how rapidly artificial intelligence has pushed the boundaries of what’s possible. It’s raised expectations of what we expect from computers. (Even Siri has.) In that mindset, Google is basically a gigantic database with rich access and retrieval mechanisms without the ability to create new knowledge.

The company may have embellished PageRank with “semantic” knowledge that enables it to return incrementally better results — but it cannot solve problems. But Watson can. It can solve problems through its ability to reason about its store of information, and it can do it by conversing with people in natural language. It can create new knowledge from the ever-increasing store of human and computer-generated information on the Internet.

In other words: Google can retrieve, but Watson can create. Watson is still a game changer … and we shouldn’t dismiss it as a one-time stunt. True, it cannot answer some basic questions that children can with ease — it famously got the Toronto answer wrong on Jeopardy, and others have pointed out that it and such AI won’t ever get completely novel or bizarre questions right (like “Can an alligator run the hundred-metre hurdles”).

Still, Watson can do lots of things that people actually care about. It has the intelligence to make sense of the data strewn all over the internet; it can even summarize complex legal cases, answer health issues, and much more.


Google can retrieve, but Watson can create. There would be no reason for anyone to start their searches on Google. And IBM could transition once again.
Watson is a thinking machine that needs supercomputers at the moment (this isn’t a theoretical requirement). Google is a retrieval machine with a scalable architecture of massive amounts of simple processors and storage. Together, these IT competencies would provide a formidable combination of a machine that can remember, know, and think. Interestingly, IBM has the capability — despite the reality that IT-based competencies are not easy to replicate — to assemble a “good enough” version of such a search engine. And while Google could probably build a Watson, it would take years to do so, and Google isn’t used to playing catch-up (not to mention this kind of approach goes against its DNA for how it thinks about search).
We already know that stalwarts like IBM, Microsoft, and Apple have all appeared invincible at some point in their history only to be unceremoniously dethroned; the most recent example was Blackberry. Some of these companies, however, made clever use of network effects — where a good becomes more valuable as more people use it — to lock in customers and remain entrenched. Like Microsoft.
With network effects, an inferior product can thrive for a long time because the costs of switching are prohibitive. But Google has no network effects. No one has loyalty to Google per se — nor are its products aspirational as Apple’s have been. This makes the company much more vulnerable to disruption.
IBM, meanwhile, hasn’t been particularly successful in the consumer space. But it has been a resilient company: It was smart enough to pick a leader that transitioned it from a dying mainframe mentality to a thriving integrated services one while maintaining its core strengths. So it could transition once again. The only question is whether it wants to try and dethrone Google from its perch. That’s one answer Watson can’t provide. 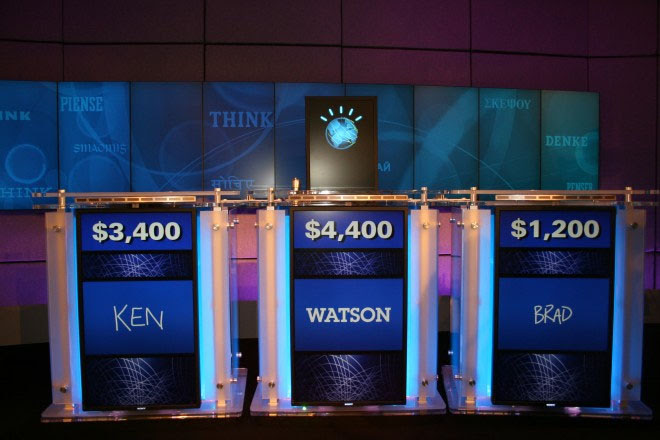