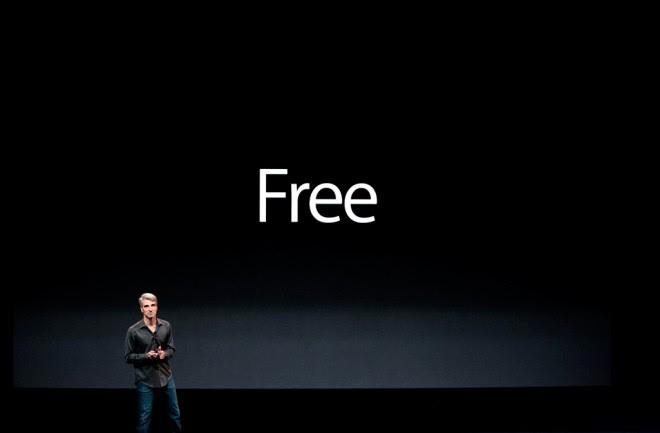 Craig Federighi announces pricing on OS X Mavericks earlier today. Photo: Christina Bonnington/WIRED
The desktop operating system is dead as a major profit center, and Apple just delivered the obituary.
Amid a slew of incremental improvements to its iPad tablets and MacBook laptops, Apple today announced some landmark news about its oldest surviving operating system: It will not charge for the latest big upgrade, Mac OS X 10.9 Mavericks, breaking from a tradition that goes back 16 years and shining a light on a long-unfolding reversal in how tech profits are made. Eighteen years ago, the tech industry’s dominant company made nearly half its revenue selling OS licenses. Now, as Apple just confirmed, the prices of OS licenses are headed towards zilch.

Prices of Apple’s Mac OS X have long been on the wane. After four releases that cost $129, Apple dropped the operating system’s upgrade price to $29 with 2009’s OS X 10.6 Snow Leopard, and then to $19 with last year’s OS X 10.8 Mountain Lion. Microsoft — the king of the operating system in the ’80s and ’90s and on into the aughts — still charges PC makers who sell the Windows OS preloaded on their desktop and laptop machines, but that business is shrinking, thanks in large part to the continued success of Apple. And just last week, Microsoft announced that, much like Apple, it would not charge consumers who upgrade their machines to the latest version of Windows, version 8.1.

As the mobile world takes off, it’s only natural that the desktop and laptop world would move towards the free model as well

Part of what’s going on here is that the low-cost mobile ecosystem has changed the way people think about operating system software. Smartphones and tablets have left traditional computers in the dust, and their operating systems and apps are overwhelmingly free. Upgrades to Apple’s iOS platform — which powers the company’s iPads tablets and iPhones — have long been free, as have new versions of Google’s Android mobile OS. Like Microsoft, Google supplies operating systems to outside hardware makers, but unlike Microsoft, it doesn’t charge them for the software. Phone and tablet makers can load Android on their devices for free.

So, as the mobile world takes off, it’s only natural that the desktop and laptop world would move towards the free model as well.
Microsoft’s OS sales once generated 47 percent of its revenue, but they contributed just 25 percent last year on decelerating Windows licensing (and even that figure is inflated by ad revenue from Windows Live). In response, Microsoft is restructuring as a “devices and services” business — meaning a company that sells hardware like the Xbox and web services like Azure. In other words, it’s becoming more like Apple. Apple isn’t really a software company. It makes software and services that run on its own hardware devices. In a way, operating systems are returning to their roots as a kind of loss leader. Before the personal computer revolution of the late 1970s, operating systems were just one piece in a vertically integrated stack of technology, a stack that also also included hardware and support services. Operating systems like Unix and VMS were used to sell minicomputers and workstations, and companies made their profits on hardware and support contracts. OSes such as BSD UNIX were completely free, and programmers would pass them around at will. Under the same philosophy, Apple gave away new versions of its Macintosh operating system until the crisis years of the late 1990s, when hardware sales slowed dramatically.
In the rapidly developing smartphone and tablet markets, tightly-coupled stacks are once again dominant, so OS makers can subsidize their operating systems with profit from the products integrated into them. Google, for example, subsidizes its mobile OS by selling online ads, and, in theory at least, by selling Motorola-branded hardware. Apple’s iPhone profits come from hardware and service sales, not the OS.

“The OS always ‘seemed’ free. You got it with your computer,” says former Microsoftie Joel Spolsky. “Doesn’t mean it wasn’t a profit center. Probably the only people who noticed the price of Windows were the people who went out to the store to buy a newer OS for their older computer to upgrade it, but I don’t think that was a super-mainstream thing to do. Most people didn’t upgrade their OS until they got a new computer.”

So to the average consumer, the 21st Century sea change in OS pricing might not be particularly apparent. But to Microsoft shareholders, it will look very real and very scary. The company must make up that 25 percent somewhere else.